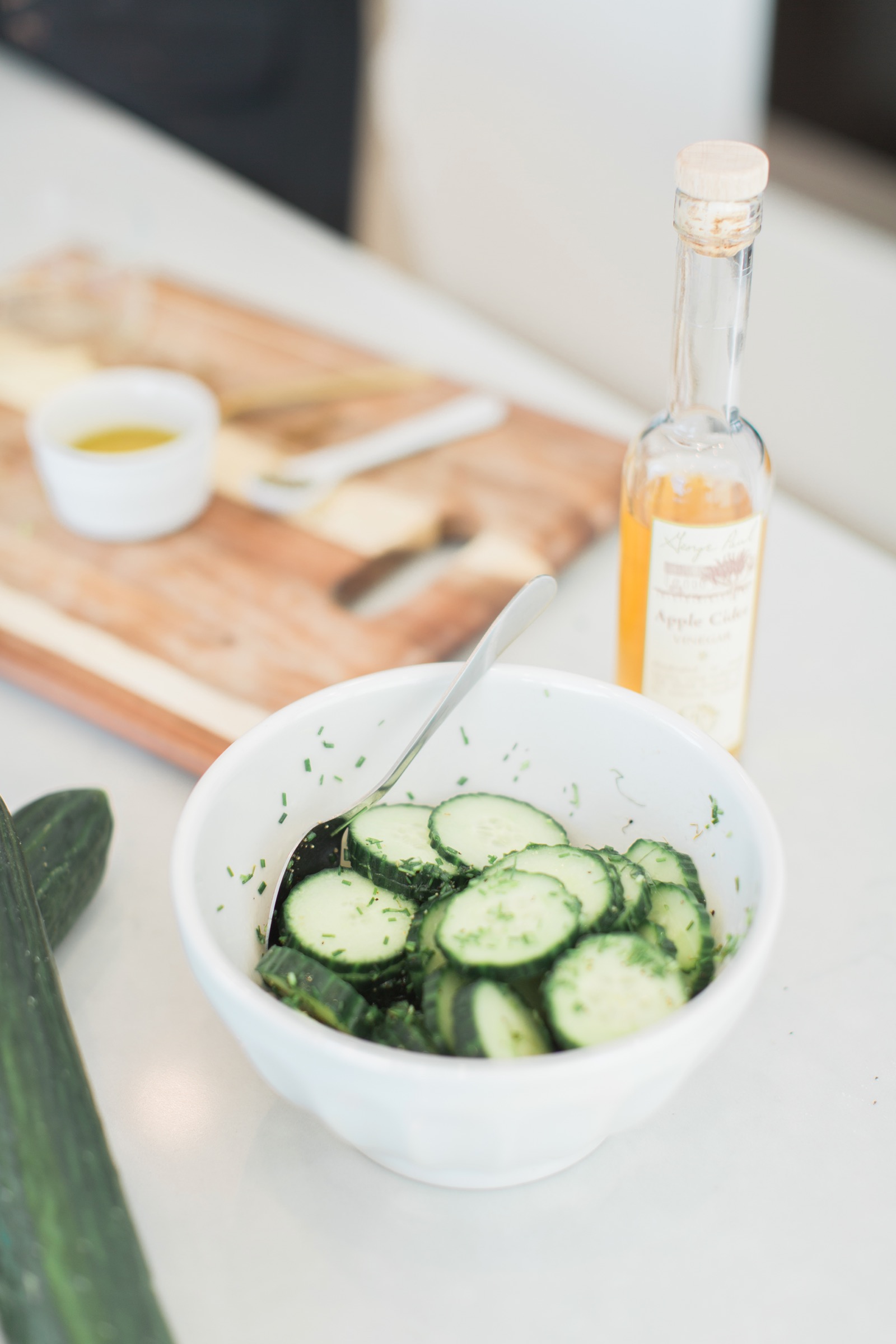 We know if we eat right, we’ll feel good. We also know if we eat right, our skin will straight-up glow from the inside out. Yet most of us don’t realize the correlation between food & haircare. That what we eat not only effects our mood & skin, but our hair too. dpHUE co-founder, Justin Anderson, spills the secret on exactly which food will make our hair grow longer, stronger, & with that glow we all dream of: Apple Cider Vinegar.
Eat it, spray it on your hair, leave a mask on your hair — whatever you do, Justin recommends you incorporate Apple Cider Vinegar into your routine asap. “There are a ton of different health benefits for ACV — it’s amazing for your skin & gut health. We found that with the hair, it’s really great because ACV naturally seals the cuticle of your hair & when your hair is sealed, it’s more shiny & makes it stronger,” he notes. Take it from the expert, while he hates to call himself a “celebrity” stylist, that’s exactly what he is. Celebrities, influencers, & those in the public eye all dream of getting an appointment at the highly coveted dpHUE house where Justin shares tips on haircare, his favorite products, & colors hair. We’re talking everyone from Miley Cyrus to Kim Basinger.
So just how did he get these big names lining up for him? Justin credits always saying yes, regardless of the time of day or how big the task was. “My big, big break was when Kirsten Dunst was red going blonde for Marie Antoinette. I had just started doing hair, I was an assistant & they [her team] called the salon at 6pm. Everyone else was like ‘no I’m going home, tell her she can come tomorrow’ but I was like ‘I’ll stay!’. I stayed until 2am & right after that Vogue wrote an article about the up & coming blonde guy. I was 23 years old or something & there was a picture of me in Vogue. You just always have to say yes even if it doesn’t sound like the thing you want to do, it might be the greatest thing you do,” remembers Justin. That with a little manifestation & you could be making all your wildest dreams come true. At least that’s what worked for Justin. Thinking back to his days in beauty school when FRIENDS was still on the air, Justin would think to himself, “one day I’m going to shampoo her hair” in regards to Jennifer Aniston. Flash-forward to 2018 & Justin is not only shampooing her hair but coloring it & flying across the world to movie sets to ensure Jennifer’s hair is perfectly touched up for her work. So yea, if Jennifer is using ACV on her hair per Justin’s recommendation, we probably should too… 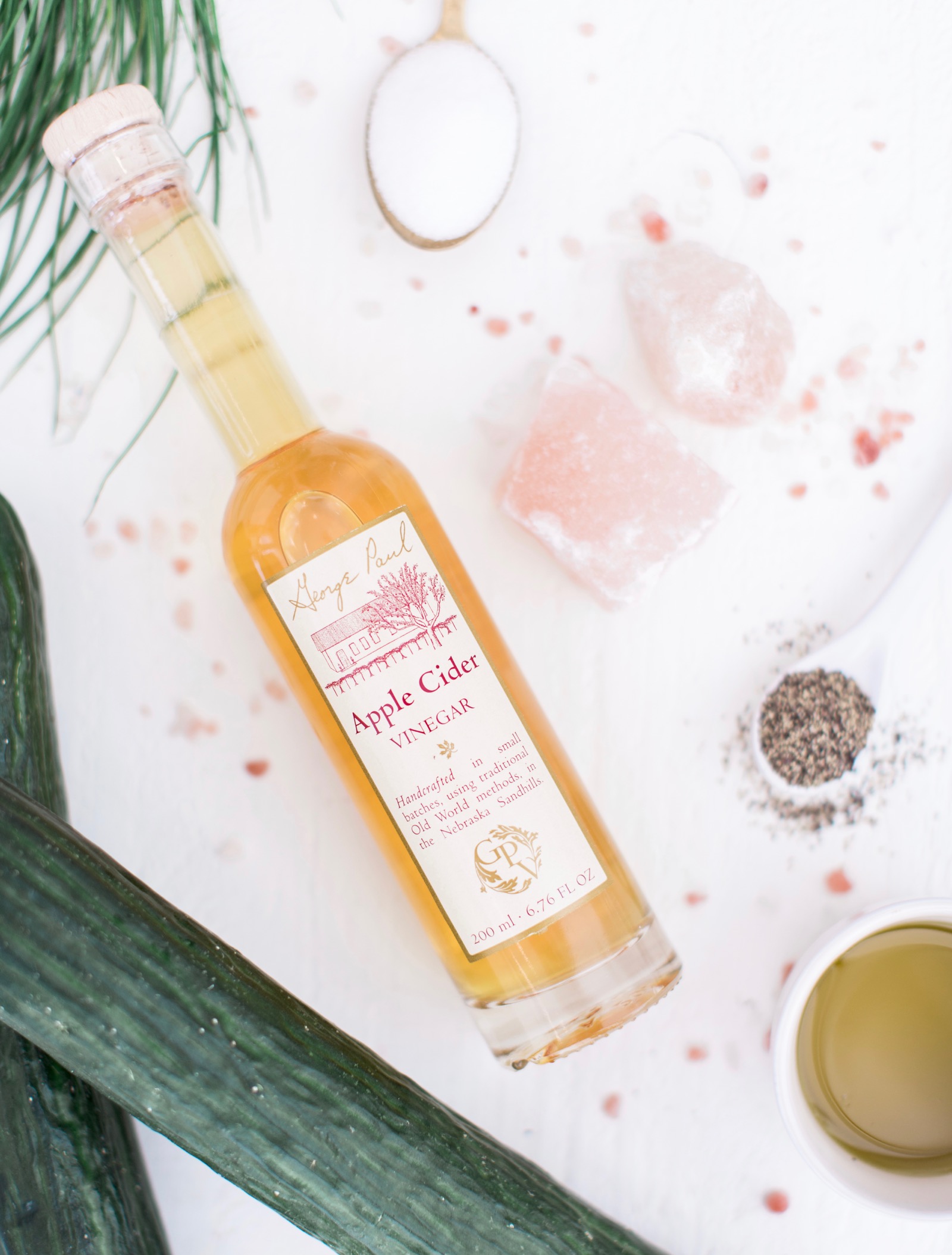 The dpHUE difference is that their ACV doesn’t smell upon rinse or strip the hair of color as some other products can. Justin truly cares about maintaining his clients’ hair in between coloring sessions which is why dpHUE uses the best & highest quality ACV. Might sound shocking as you’d expect a colorist to want you back in the chair as often as possible, but Justin truly believes in sharing his secrets. Now-a-days with social media there is the idea that we can DIY whatever we want & these DIY tips Justin shares are what keep his clients looking so great in-between visits. “I have this philosophy that the longer your clients’ color looks good, the better it’s going to be for your business,” notes Justin, “People keep asking ‘Your hair color looks amazing! Who does it?’ & they’re like ‘Oh really? I got it done 3 months ago…,” leaving everyone wanting to see Justin, & his clients feeling proud to go to him. He adds, “Us taking care of our clients is really just going to bring business back to us.”.
Aside from using ACV in hair, Justin also takes a shot of it every morning. He swears when he consistently does that he has zero belly fat (you can dilute it in water if the flavor is too strong!). Still not sold? Not sure how that could be possible BUT Justin shared this insanely delicious recipe for an ACV salad that’s not only picture perfect but tastes really freakin’ delicious. It’s loaded with all types of health benefits to help you & your hair glow from the inside out. Plus it takes only a few minutes to make. Best. Salad. Ever. 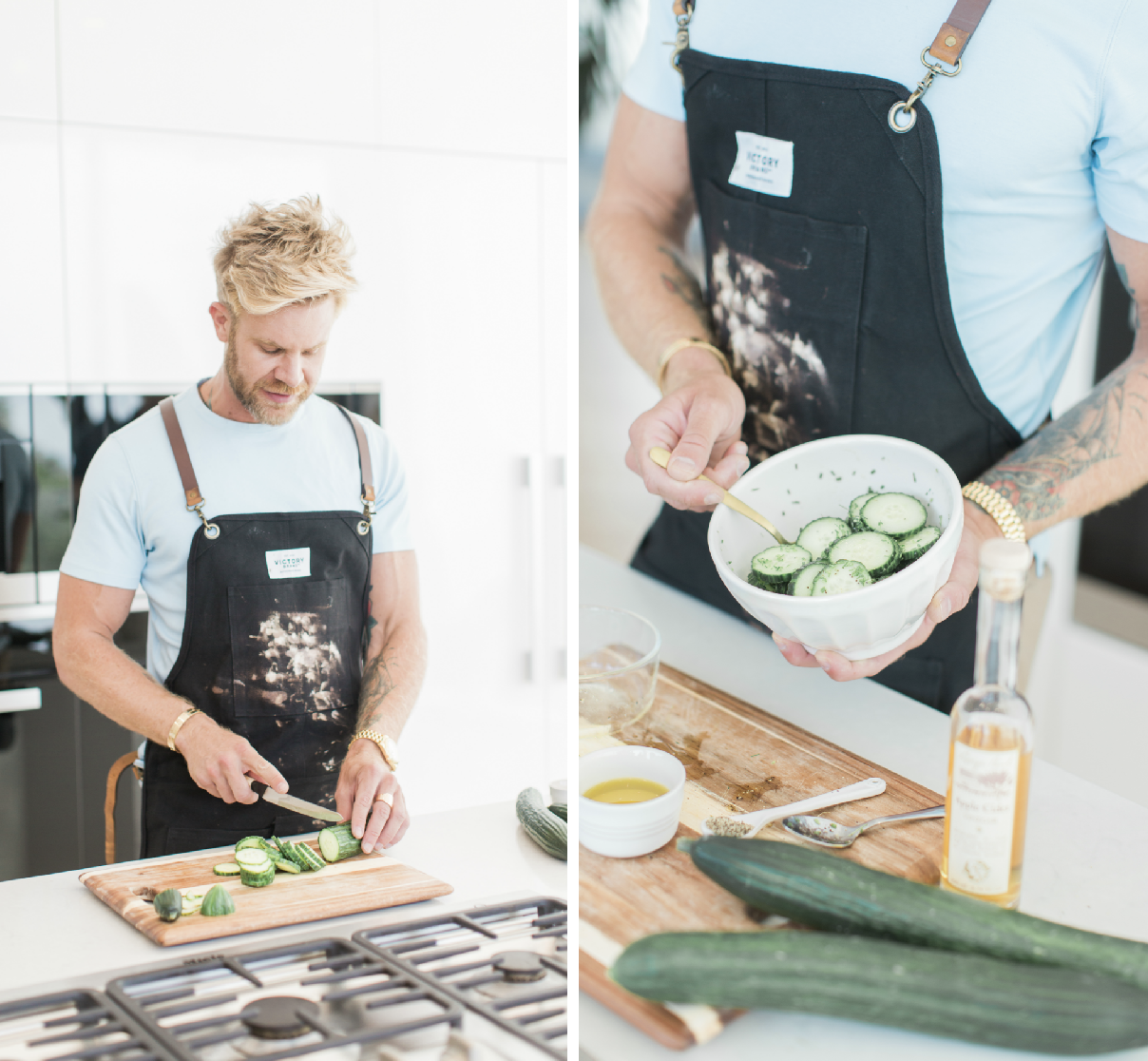 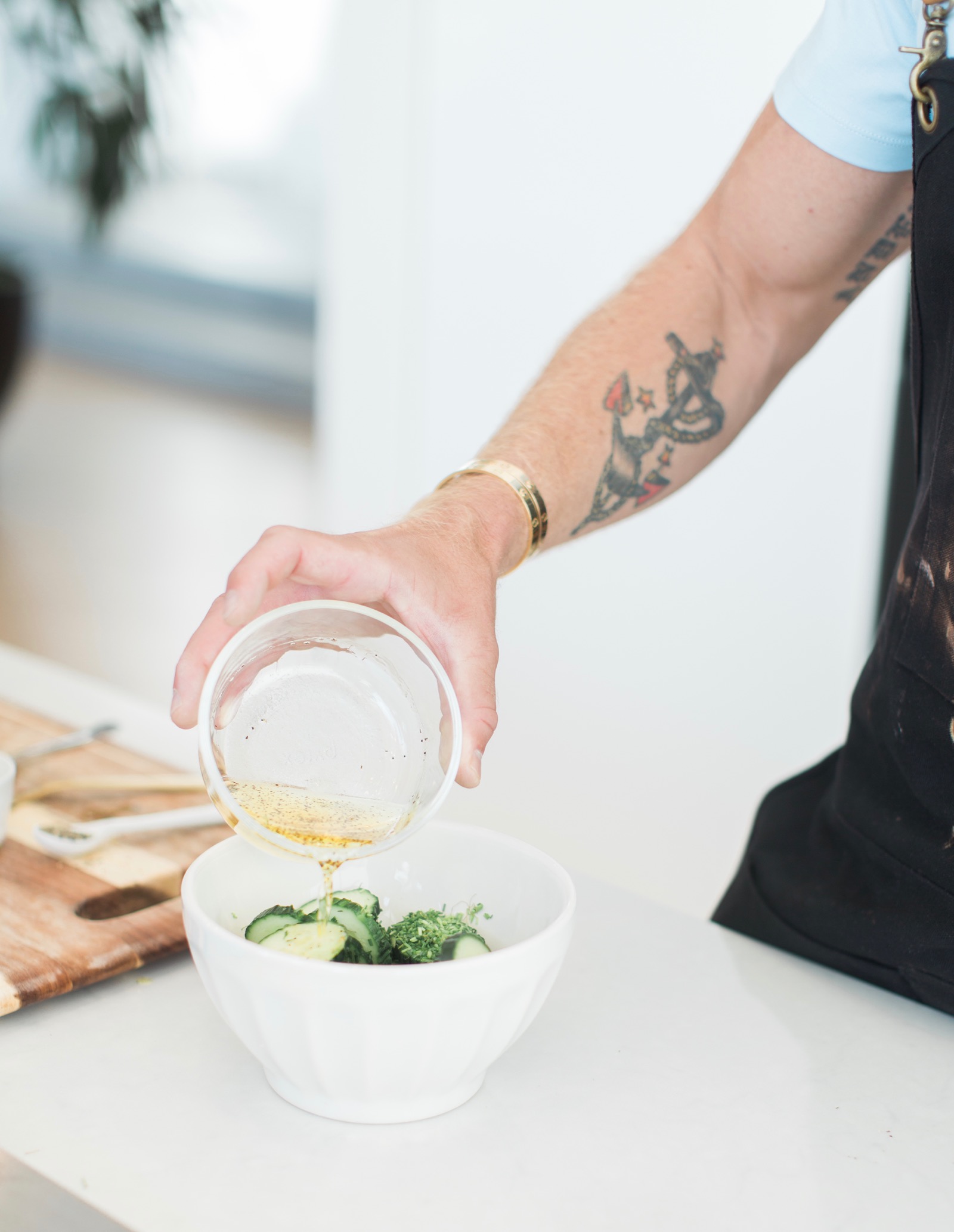 If you could spend the day In The Kitchen with one person who would it be?
“My good friend Kristin Cavallari! I’ve loved Kristin forever, she was probably my first celebrity client. It’s [cooking] not this trendy thing for her, she’s really obsessed with learning new things & what food can do for us,” notes Justin.
Favorite restaurants in LA?
Pizzeria il Fico (for GF pizza), Madeo Restaurant, Dan Tana’s, & Craig’s.
Whose hair have you not yet done but would love to?
“I’m such a Britney Spears freak, I love her. I don’t really want to do her [hair] because I don’t want to be let down. If she didn’t really talk to me or had that bitchy attitude I would be so let down. Or maybe we’d be best friends & she’d be obsessed with me,” says Justin with a laugh.

Guilty Pleasure?
“Big Brother. If I had time I’d be on the show in a second. It’s the only way I can shut my brain off. My mom freaks out that I watch reality TV.”
Proudest moment?
“When I was a kid I used to love the Home Shopping Network (HSN). I thought it was so interesting that people could be so passionate about this one thing they created. Going on it [HSN], I mean I hated it…but when I left I was like that was freakin’ cool,” Justin notes on coming full circle.
Was there a time you said yes but should have said no?
As he mentioned earlier, Justin is a yes man. However when Katy Perry came to him saying she wanted to go blonde, like really blonde, Justin wanted to say no, “I said girl your hair is so fried, I’ll try what I can do but I’m not going to push it any further,” he notes. “She’s like ‘let’s just push it’ & so we went for it. I should have just said no…I did her hair & it all broke off,” Justin remembers. However that breakage is what lead Katy to cut her hair into her pixie cut, turns out she ended up loving the look & has had it for years now. 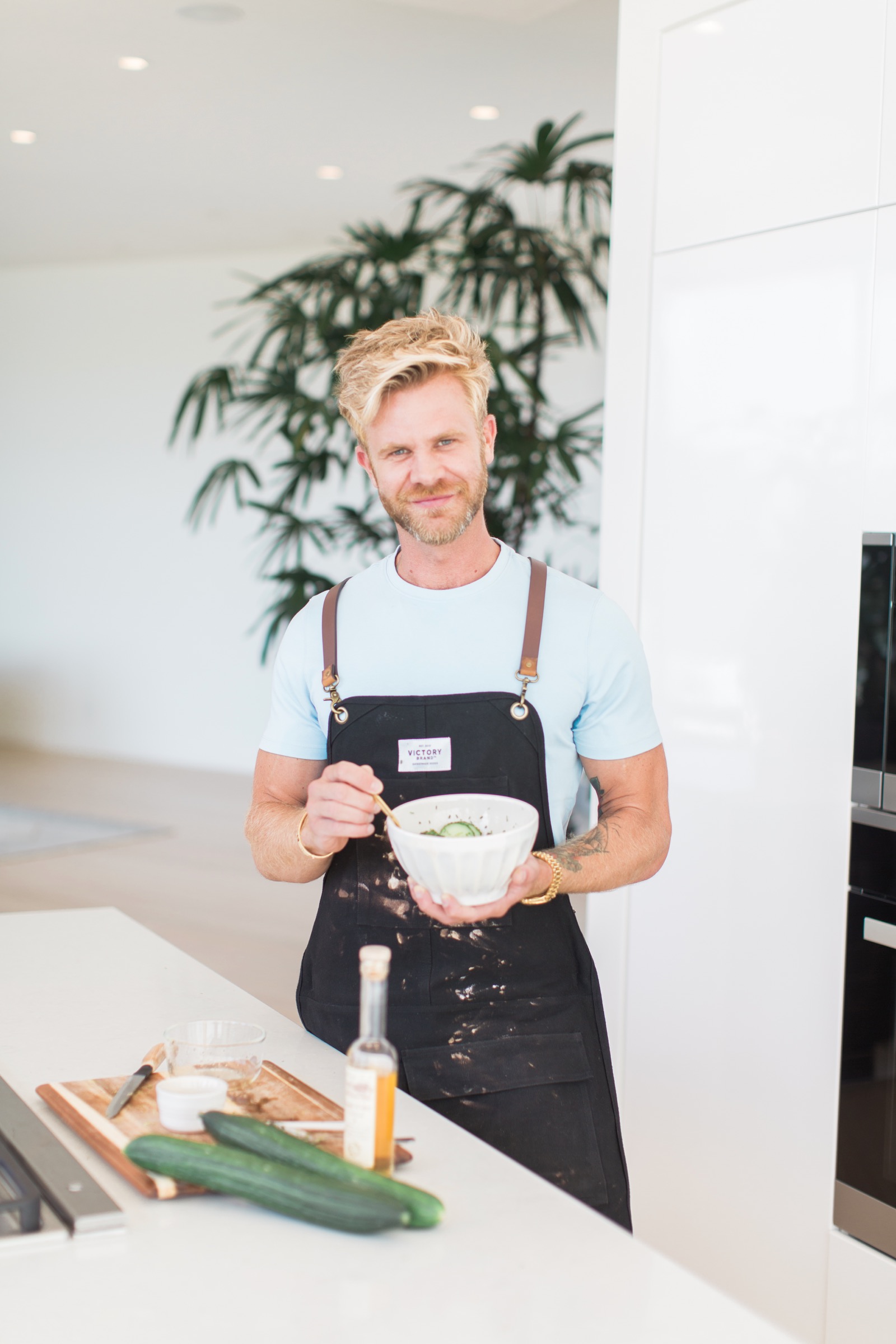