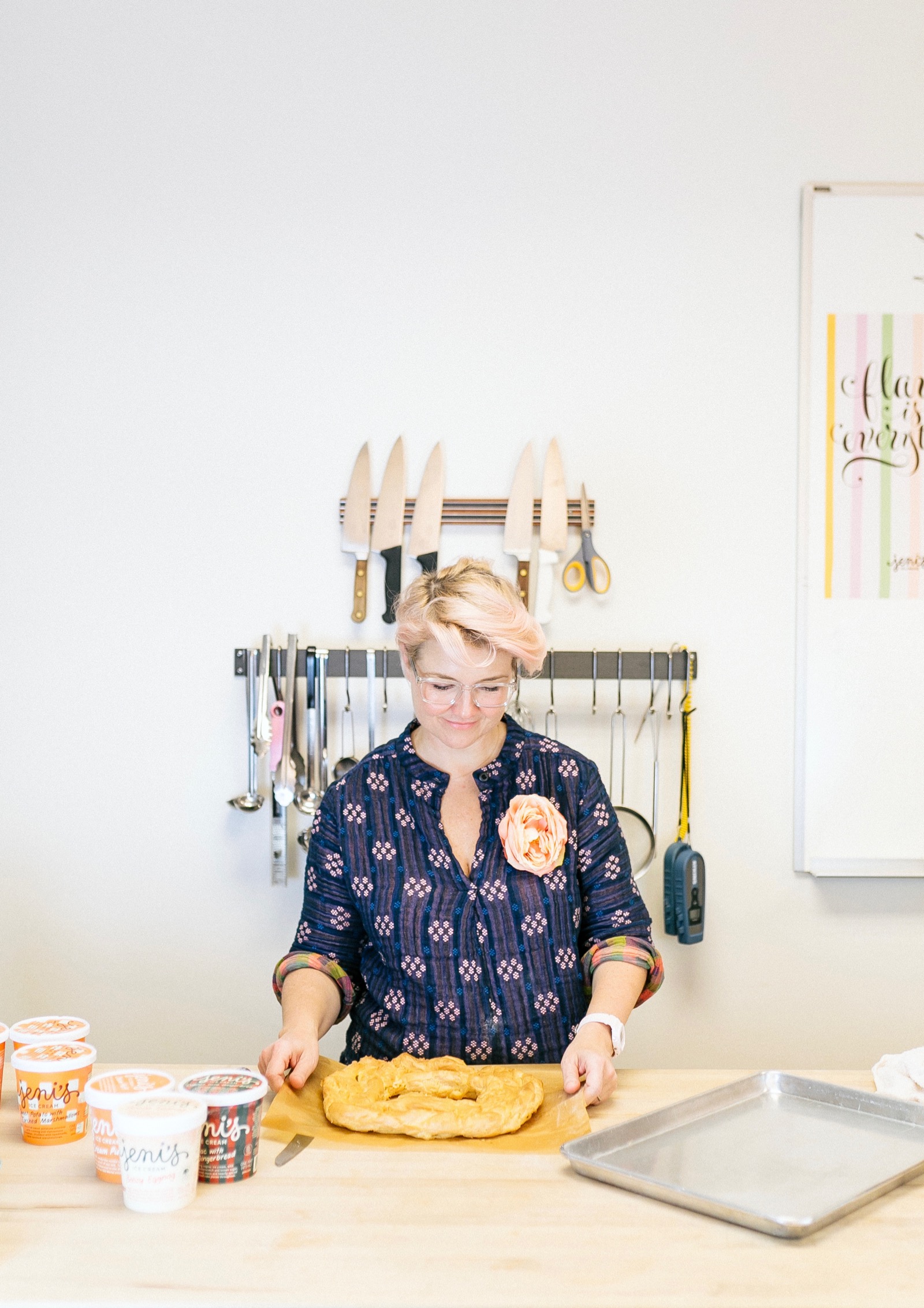 Willy Wonka is remembered as everyone’s childhood hero. He was the man you looked up to as a child & the person you wanted to befriend as a teenager. As an adult, you greatly idolized his creativity & ability to brighten others’ days so naturally. After chatting & baking with ice cream expert, Jeni Britton Bauer of Jeni’s Ice Cream, we can confidently proclaim, she is in fact the real life Willy Wonka, maybe even a little bit better. With pink hair that matches her bubbly charm & an ice cream empire that has reinvented how we consume the old-time treat, Jeni is a business mogul with the ability to bring happiness to everyone she, & her ice cream, come into contact with. 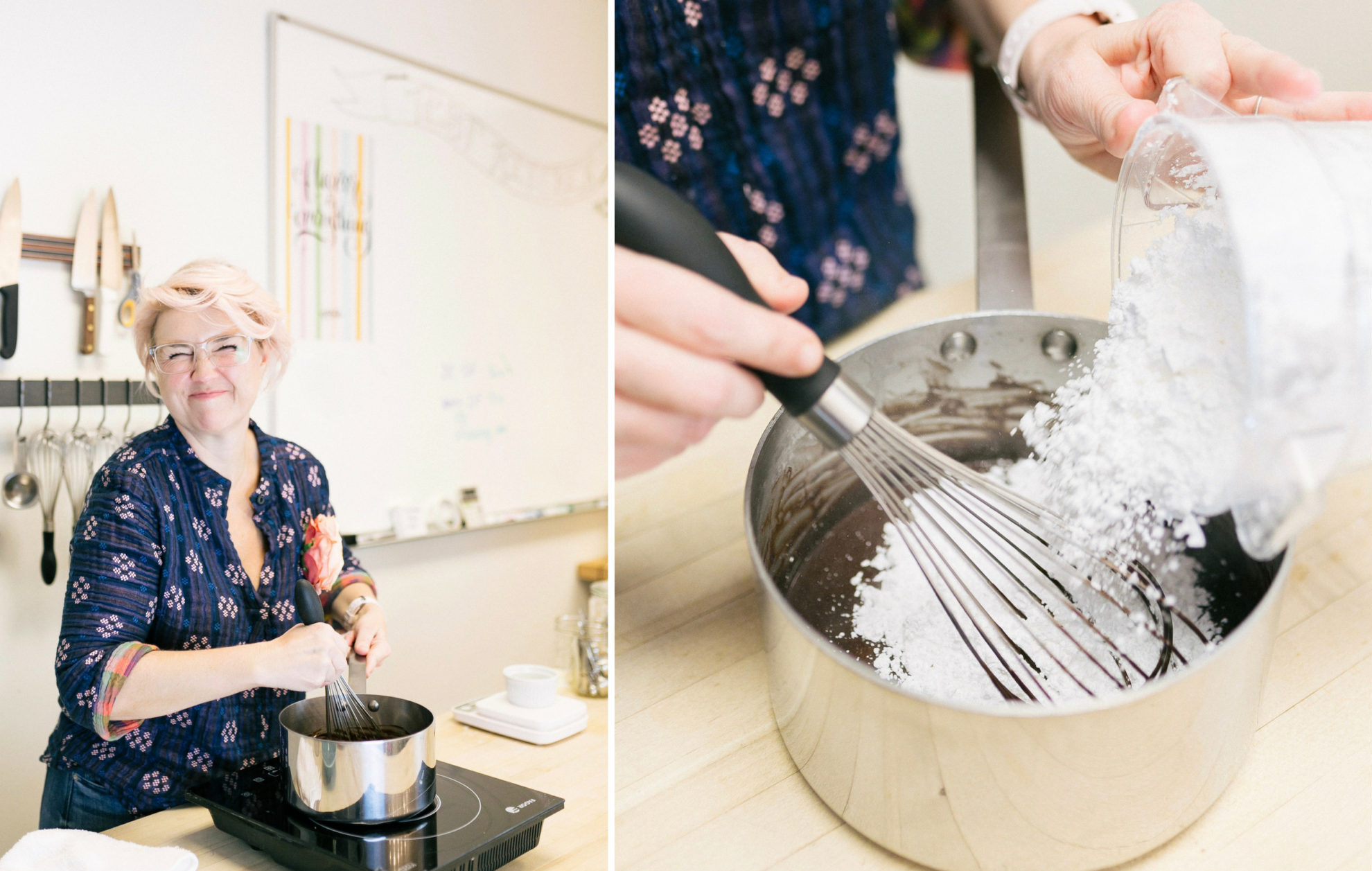 Though we can go on & on raving about Jeni herself, it wouldn’t seem right given Jeni’s main focus is those she surrounds herself with, consumers, & collaborators alike. “We built a company on collaborations,” notes Jeni, “We, behind the scenes, are a company that care more about what we do that you don’t see than what we do that you do see because actually you do see it, it’s what makes great ice cream.” Sourcing ingredients from local breweries & farmers has been just one of the numerous traits that differentiates Jeni’s from other ice cream vendors. Aside from ingredient collaborations, Jeni’s has partnered with brands such as Clare V., Estee Lauder, & Intelligentsia to create custom flavors that match the brands’ personalities. One brand Jeni has yet to collaborate with but is on her dream list is the cult-favorite beauty brand, Glossier. Known for their millennial pink packaging, Glossier creates simple products with few ingredients that are extremely effective & top-rated. You can see how this collaboration would be seamless… Another similarity between the two, Jeni notes, is that beauty chemistry is exactly like making ice cream, even down to the sugars & all, which would make working together a breeze. 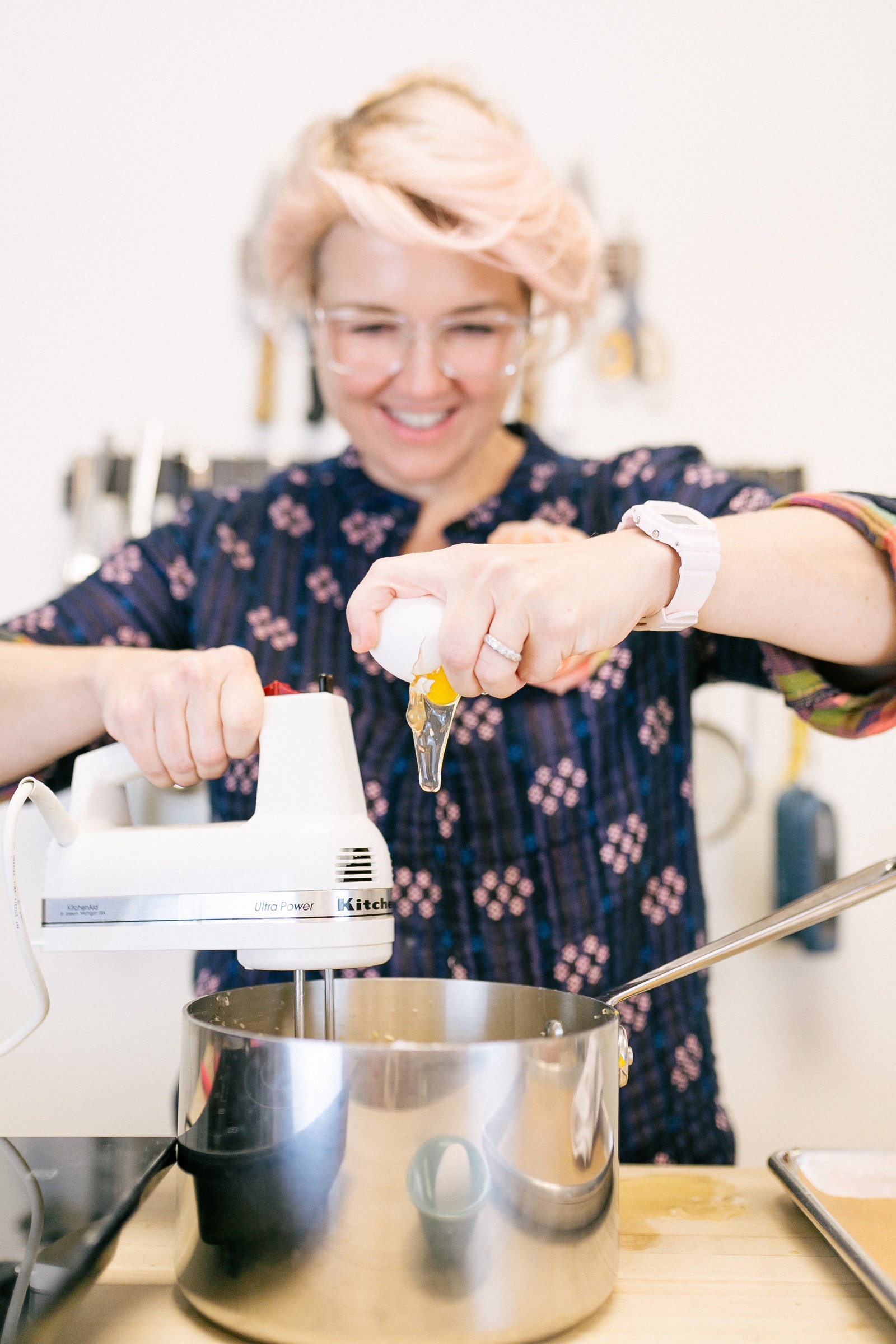 Ironically for Jeni, while ice cream was always huge part of her life growing up, as it was & still is ours, she wasn’t exactly crazy about the stuff. “If it’s your birthday or the weekend or you have nothing to do, you go & get ice cream,” Jeni recounts about her childhood in Peoria, Illinois, where ice cream was just a thing you did. When her family moved to Columbus, Ohio Jeni became the first employee at Graeter’s Ice Cream shop at just 15 years old. “I had to get a work permit but I was pounding at the door. I always knew I would work in ice cream.” After starting her first ice cream shop, Scream, in Columbus, Ohio, Jeni immediately saw how little she actually knew about ice cream, even after all those years of working in the industry & essentially becoming a professional taste tester. Taking what she knew from her studies of perfuming & art history at Ohio State University along with her pastry experience from La Chatelaine, a French bakery in the city, Jeni started studying. Perfuming & ice cream both have a similar chemistry base & Jeni immediately saw how scents could define an ice cream flavor, taking it to the next level. Her experience in art history allowed her to master marketing, being able to tell a story which is crucial in moving your business forward. “It’s weird, it’s like your whole life converges,” Jeni explains about how all paths led her to this one.

For someone who has successfully altered one of the most classic pastimes of our generation, how did Jeni know she would be successful? History, she notes, is the answer. “If you don’t make something that people can relate to or there’s not some memory that goes along with it then it’s irrelevant to people,” she explains, “When you do something that’s way out of left field, as fun as that might be, it doesn’t make sense to anybody.” Knowing that people had to truly resonate with it yet wanting to recreate the way it was made, Jeni set out to create what is now the Jeni’s we all know & love. She uses an example of Genmaicha tea to explain how she was able to successfully tackle both. “There’s a beautiful green tea called Genmaicha, it has toasted rice in it. If you steep it in ice cream, the toasted rice has almost a toasted rice crispy flavor,” she explains, “Make it into Genmaicha & marshmallows & explain it to someone as the best rice crispy treat you’ve ever had. This genius approach has led Jeni to quite a few pinch me moments including winning a James Beard Award & writing 2 cookbooks. Yet, she notes that this current moment is the most surreal for her. “Most of my life has been like this is going to be my life & I will fight to the death for it. Everyone discourages you, everyone says it’s not possible, every friend will say sorry nobody wants that, you’ll get someone who says sorry no one is going to buy that, & your own family will say will you go back to school? They’re all worried about you so most of my life I was fighting that,” she notes but 23 years later & she’s finally doing exactly what she wanted. “I had this vision of what ice cream could be & we’re just now starting to achieve it.” Notable retailer Dean & Deluca was one of the first to catch onto what Jeni was capable of as they placed her first wholesale order. However it wasn’t as simple as that. “At one point I called Florence Fabricant at The New York Times. She’s the one who talks about new stuff & I was like ‘you may want to write about us because we’re really awesome, you’ve never seen ice cream like us,’” Jeni laughs thinking about how crazy it was she even answered the phone. Florence, while interested, told Jeni it needed to be available in New York (which it wasn’t at the time) in order for her to write about it. Hearing those words Jeni immediately got to work & created a website where customers could order Jeni’s Ice Cream nationwide. Good call on Florence’s part as Jeni notes, “We still sell more ice cream in New York than anywhere else & we don’t even have a store there!” As Jeni’s was beginning to expand with nationwide shipping & featured press (thanks to Jeni’s fearless cold calling), a former Limited employee (which is based in Columbus alongside Jeni’s), had relocated to Dean & Deluca & placed what was then Jeni’s first wholesale order. 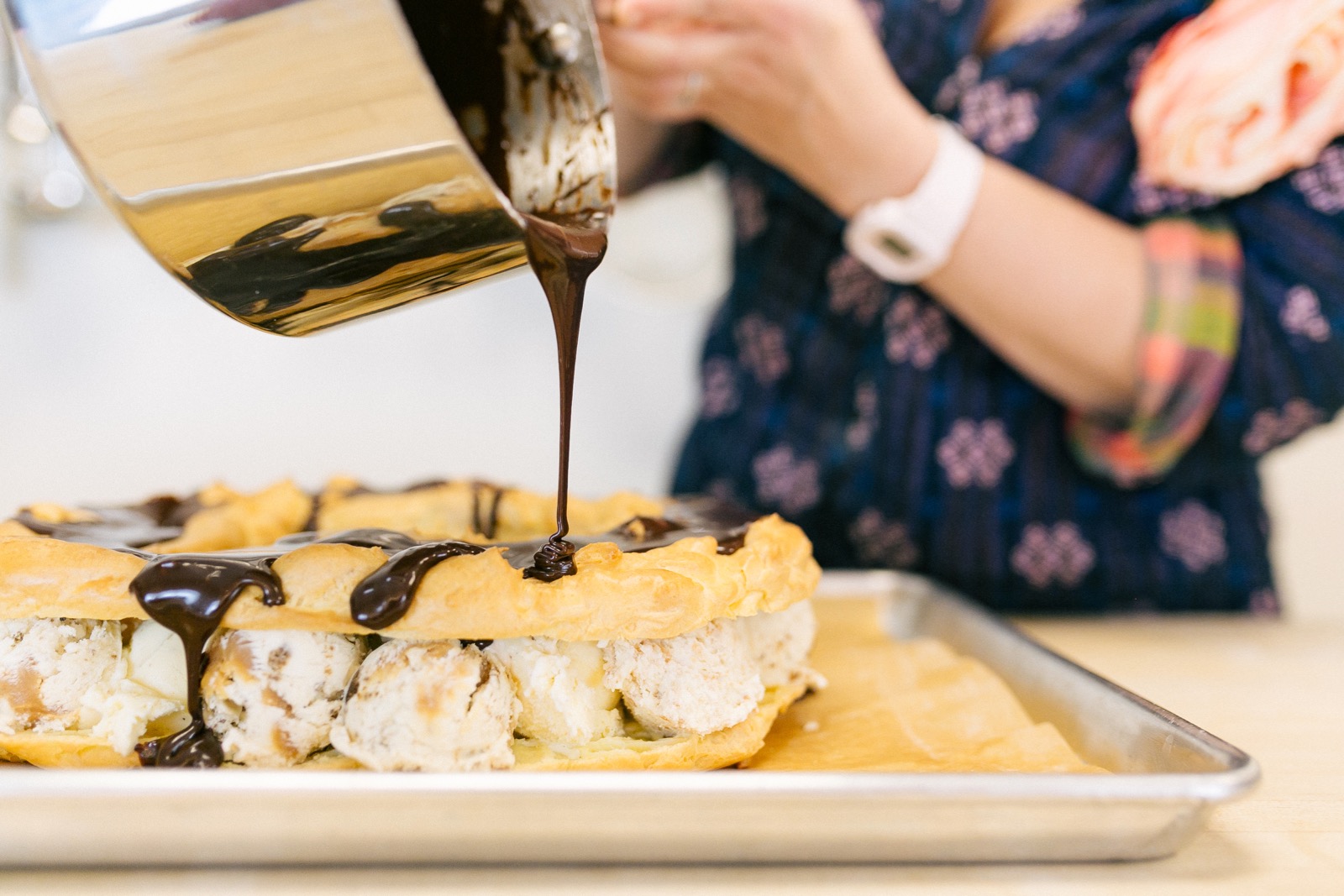 Success after success, Jeni’s wouldn’t be a true entrepreneurial story without a little mishap along the way. “There were a lot,” Jeni notes, “One of them was really gross, I mean really. Our Smoked Banana Ice Cream it was never going to work. Smoked bananas are really good, they’re carmel-y, they’re good served with ice cream.” With being the operative word, Jeni elaborates, “The bananas over-smoked it couldn’t have been more disgusting. It turned into turpentine, it was horrible!” Jeni explains some foods are better left as an add-on to ice cream rather than being served within ice cream. For this reason, you’ll never see brownie chunks in her ice cream as she notes they’re much better served warm under the ice cream instead of hardening inside it. 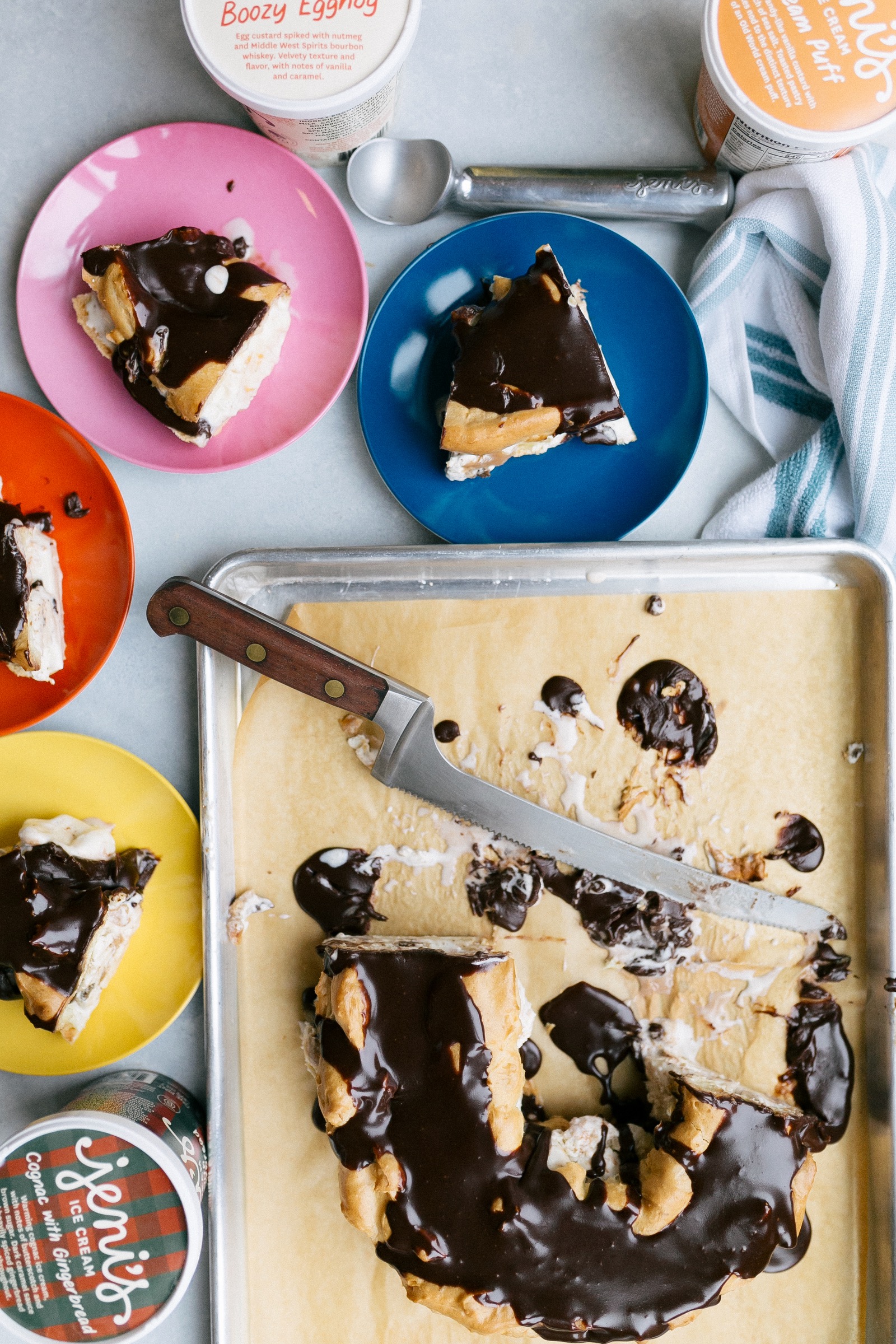 The original Willy Wonka said invention takes a whole lot of perspiration (in laymen’s terms, hard work), electricity & butterscotch ripple, however we’re pretty sure he meant Brown Butter Almond Brittle, one of Jeni’s most notable flavors (& our personal favorite) for the last bit needed. Jeni has not only recreated how we enjoy one of the world’s favorite foods, she’s invented a world behind her ice cream, one that invites all to enjoy the classic treat as it should be eaten. 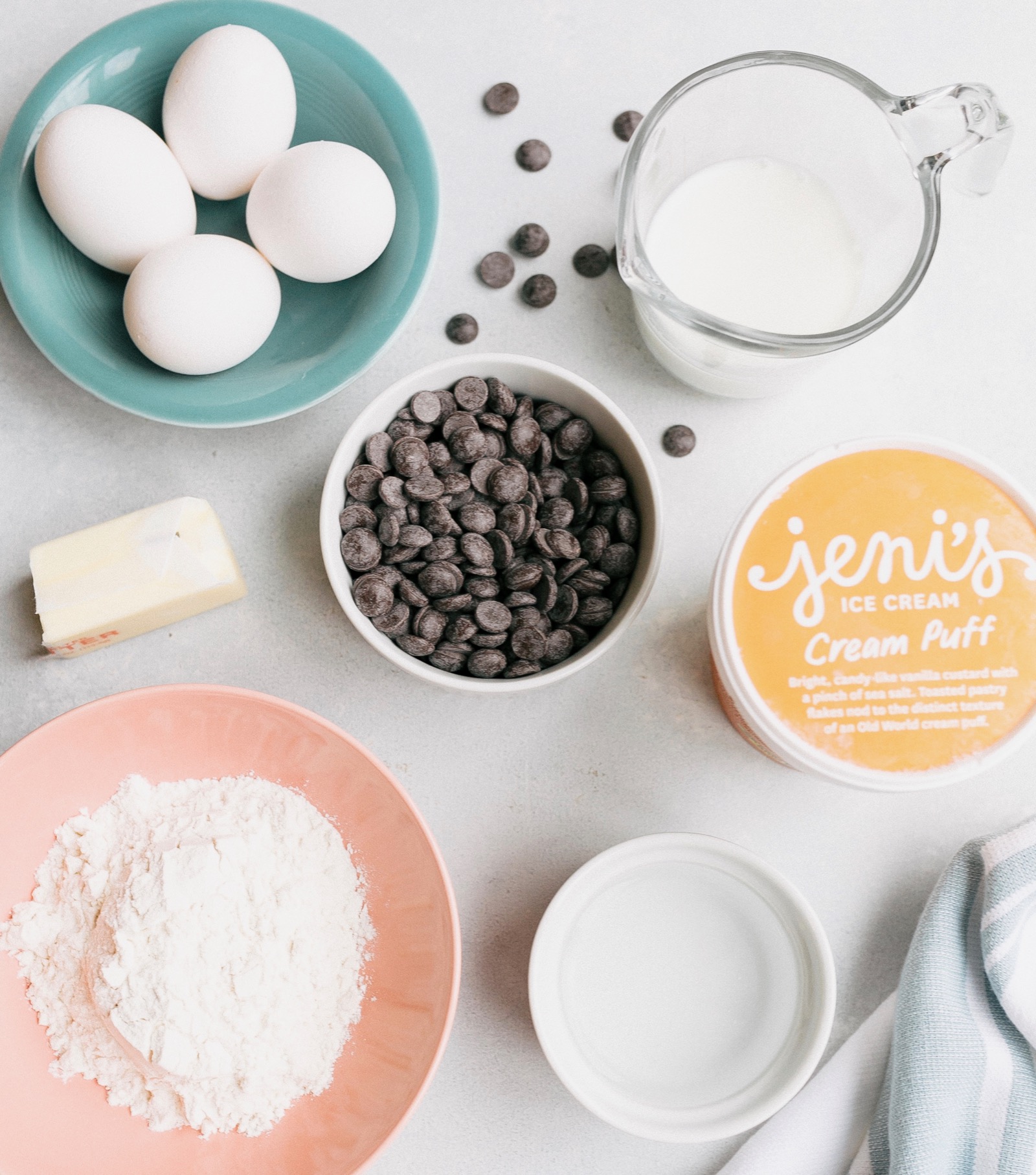 Favorite recipe besides this one?

“I’m famous for making 25 croque monsieurs in a half hour from scratch!”

Jeni’s ice cream scoop created by the Zeroll Company, designed in Ohio, & now in the museum of modern art’s collection as an example of 20th century modern design due to it’s ability to transfer heat from your hand to the bowl in order to perfectly scoop ice cream. “You know how people dip their scoop in hot water? You should never do that ever! That’s mistake #1. What happens is you melt too much ice cream & then it gets icy when you freeze it again,” Jeni notes which explains why you’ll never see her employees dipping scoops in hot water at the shop (only cold to clean ‘em in between scoops).

“Right now it’s Cognac, Gingerbread or the Cream Puff,” says Jeni of the three flavors she’s currently loving & used in this recipe, although, you can technically use any! “I also love our lemon yogurt so much. It’s actually been my favorite flavor since we first started making [it,] which was in 1996.”

If you could spend the day In The Kitchen with anyone, who would it be?