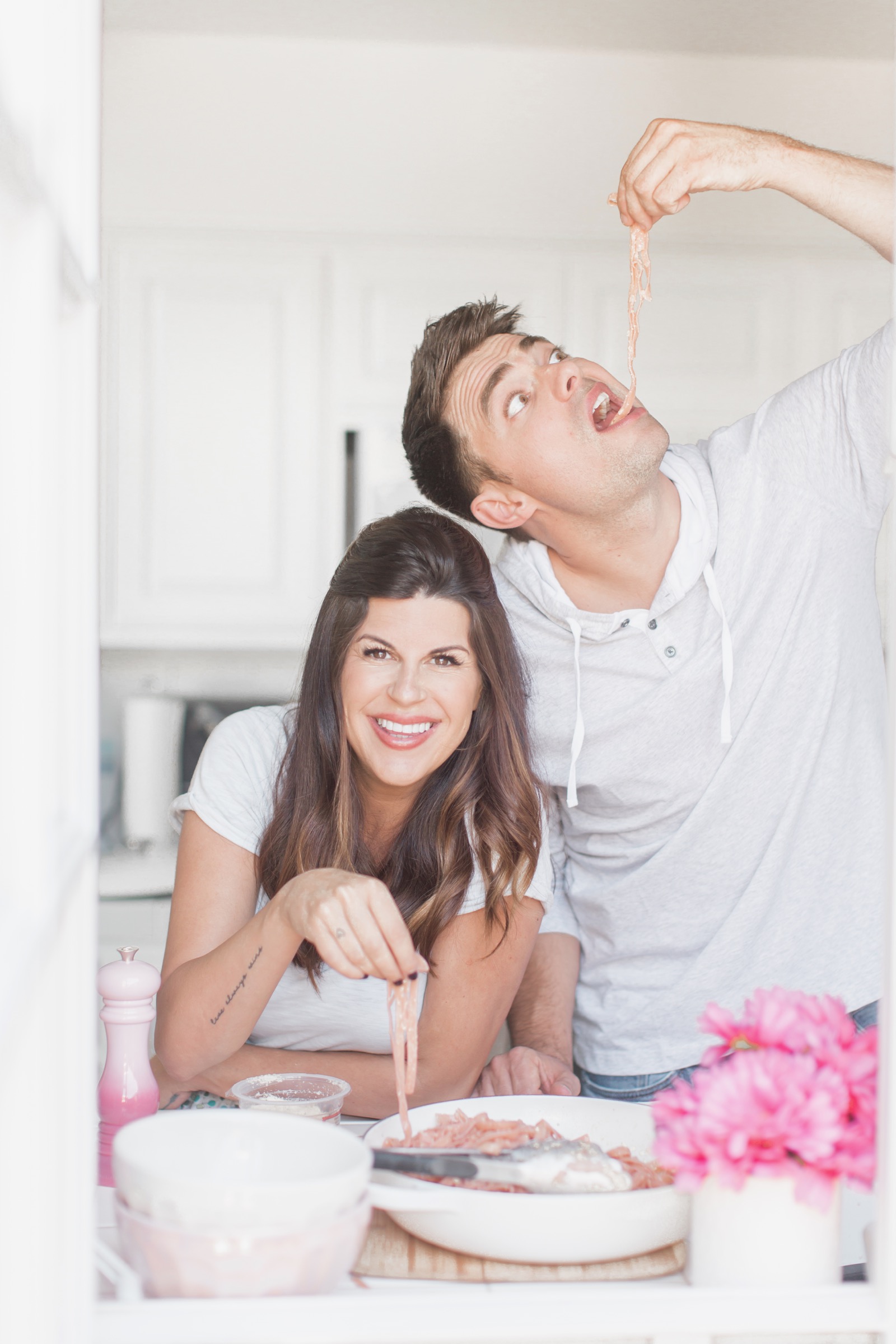 Well folks, the unimaginable has been done: Jonathan Bennett (aka Aaron Samuels from Mean Girls) & Chef Nikki Martin (she’s cooked for everyone from Kanye West to Martha Stewart so clearly she can’t help that she’s popular…) have officially made fetch happen. And they’ve done so by bringing the Burn Book to life. Except, this time instead of girls clawing at each other when it’s released, everyone will be running to the kitchen to whip up some of their Mean Girls’ inspired dishes. Their “Burn Cookbook” has everything from You Go, Glenn (Hot) Cocoa to Just Stab Caesar Salad plus Ms. Nord-berry’s Pie, Gretchen’s Weiners, Spring Fling rolls, & of course Fetch-uccini Alfredo which Jonathan refers to as ”really fucking cute” & that they shared with us below! Think of the Fetch-uccini Alfredo as a cacio-e-pepe but not like a regular cacio-e-pepe, a cool cacio-e-pepe. Plus more cream… And different noodles… Ugh whatever, we’ll just get cheese fries.

Jonathan, who took Regina’s advice & pushed his hair back for the shoot, wasn’t necessarily inspired by the food (standard craft services) on set to create this book. Instead he was making guac with a friend one night when she referred to it as “cool guac” & the idea was born. He immediately called Nikki, whom he met through their stints on Food Network & they began spitballing recipe ideas. “It [The Burn Cookbook] brings everyone together to relive their favorite moments”, notes Jonathan. You see, the irony behind The Burn Cookbook is that the movie, specifically their Burn Book, centered around tearing people apart, breaking individuals down, & causing division between those in a common area. Whereas The Burn Cookbook is entirely about food, the one thing that can bring us all together. While Jonathan & Nikki surely sit at the same table now, in high school Jonathan states he’d sit with the “drama nerds”. As for Nikki, “you’d be with the sluts! Kidding…” Jonathan jokes to which Nikki counters, “I wasn’t a slut until after! No, no, I actually hung out with the drama nerds quite a bit in high school.” One thing they’re both confident about is that Nikki would NOT have been allowed to sit with the Mathletes in high school & Jonathan, despite his character’s placement, would not have been allowed to sit with the Jocks. No, seriously, “They had to bring in a soccer coach to teach me how to kick a ball. That one goal I hit is the only one I got all day,” Jonathan adds in regards to his character getting the on-screen goal ultimately making him a regulation hottie. 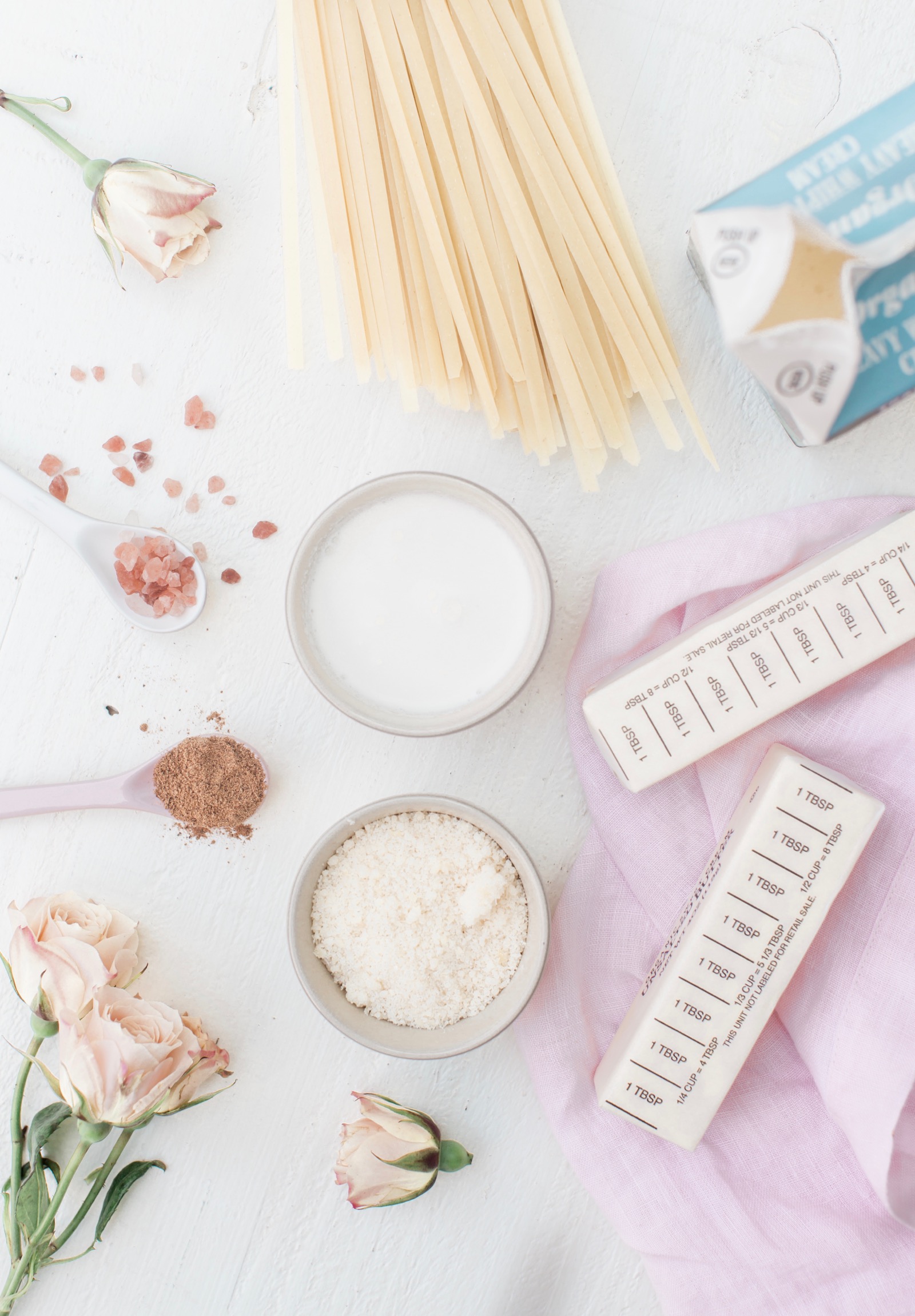 “Is butter a carb??” Jonathan asks Nikki as she pours heaping amounts into the dish. Regulation hottie AND he’s got jokes… *sigh*. While the two certainly have spent their fair share of time in the kitchen together, they’d love to spend a day in the kitchen with none other than Cady Heron herself: Lindsay Lohan. “We’d love to have Lindsay because it’d be a fun time,” notes Jonathan. “Just when I’m not pregnant….” Nikki jokes so they could really have a good time. They’d also love to get all the plastics in the kitchen & have them do a cook-off with recipes from The Burn Cookbook. Jonathan & Nikki’s favorite memory of creating the book was actually their shoot where they spent an entire weekend in the kitchen. “That’s the weekend we suspect I got pregnant because I drank so much wine,” laughs Nikki who adds that her breast milk will likely be pink just to stay on brand.

Whether you’re a freshman, cool Asian, burnout, or sexually active band geek, be prepared to become a girl who eats her feelings when you grab a copy of The Burn Cookbook. You’ll probably have to start shopping at Sears ‘cause sweatpants will be all that fits you but trust us, these recipes are WORTH. IT. 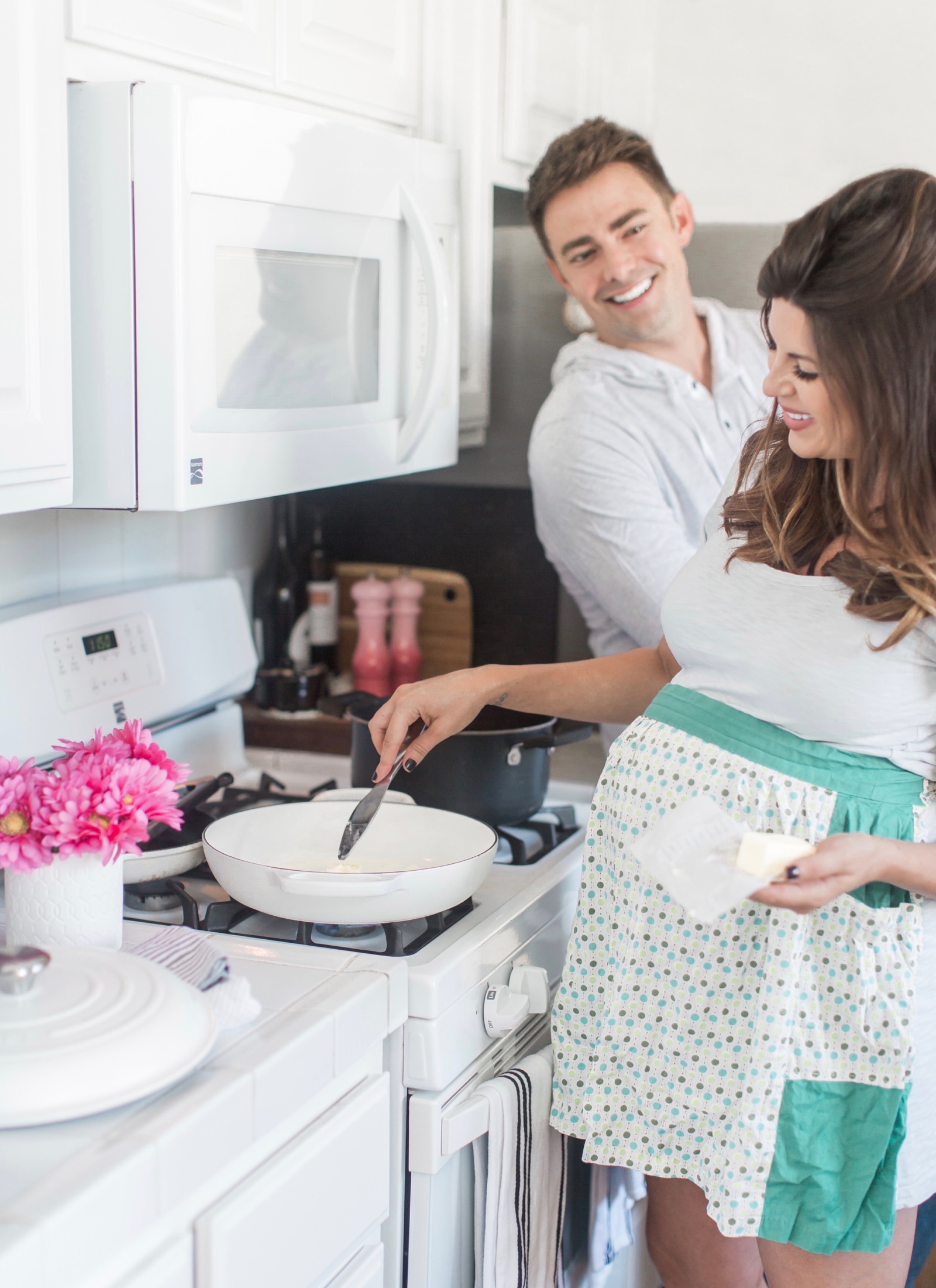 “Nikki always has Frosé (their recipe is in The Burn Cookbook!)” — Jonathan

“Even if you’re a rookie chef, amateur chef, whatever, the three things I think everyone needs at home is really good salt, really good olive oil, & a good knife so you don’t cut your hand off.” — Nikki

*Editors note: the knife should be sharp enough to cut holes on the boobs of your shirt à la Regina George.

Biggest difference in food now than when Mean Girls came out?

“Healthy is cool now! Remember this was 2004 when Pressed Juicery didn’t exist… We have a pizza that’s beet-za (made with beets) so it’s pink & if you want to lose 3 pounds you just eat this pizza.” — Jonathan

“The animal one when we’re in the cafeteria acting like animals. That was fun.” — Jonathan 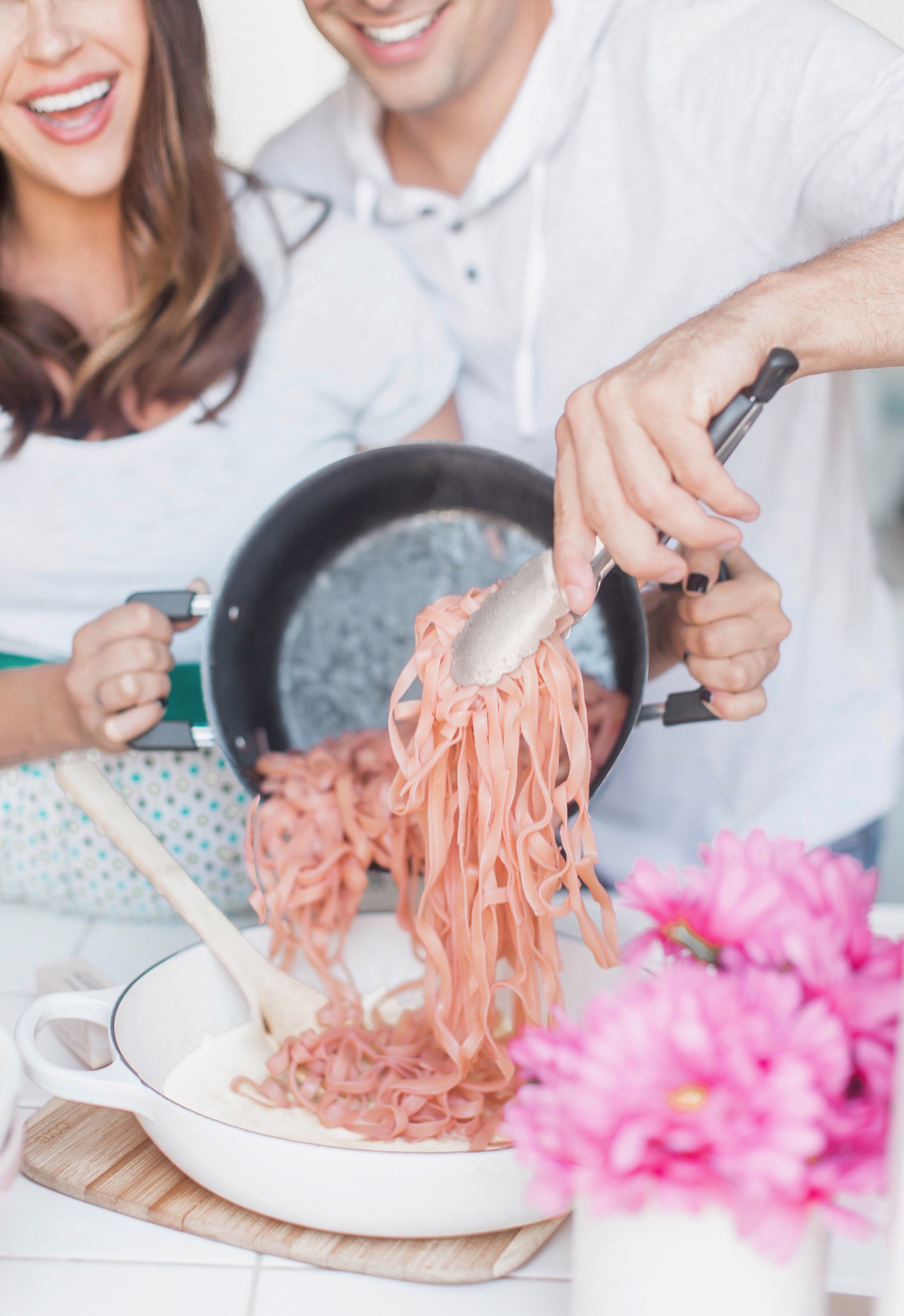 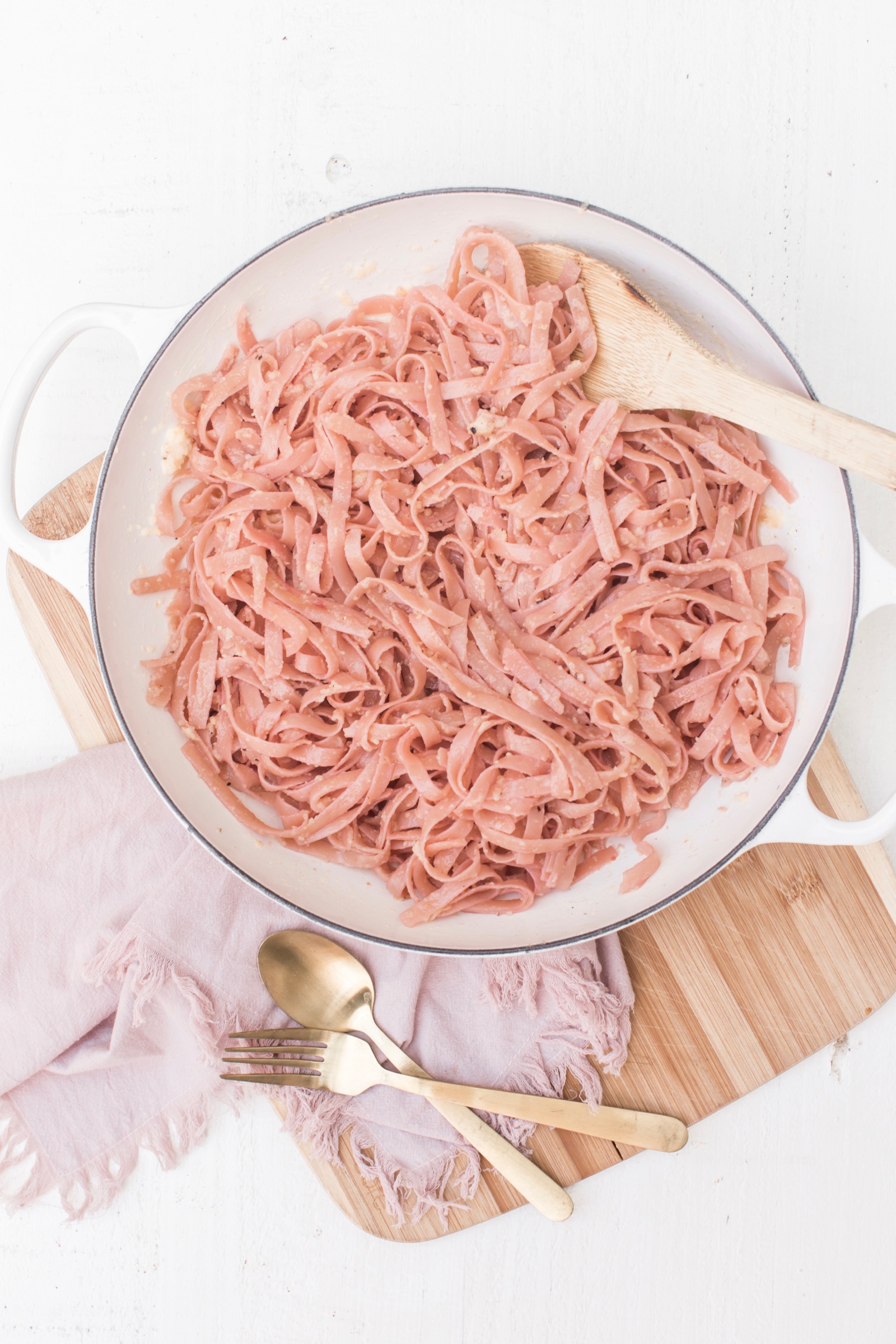 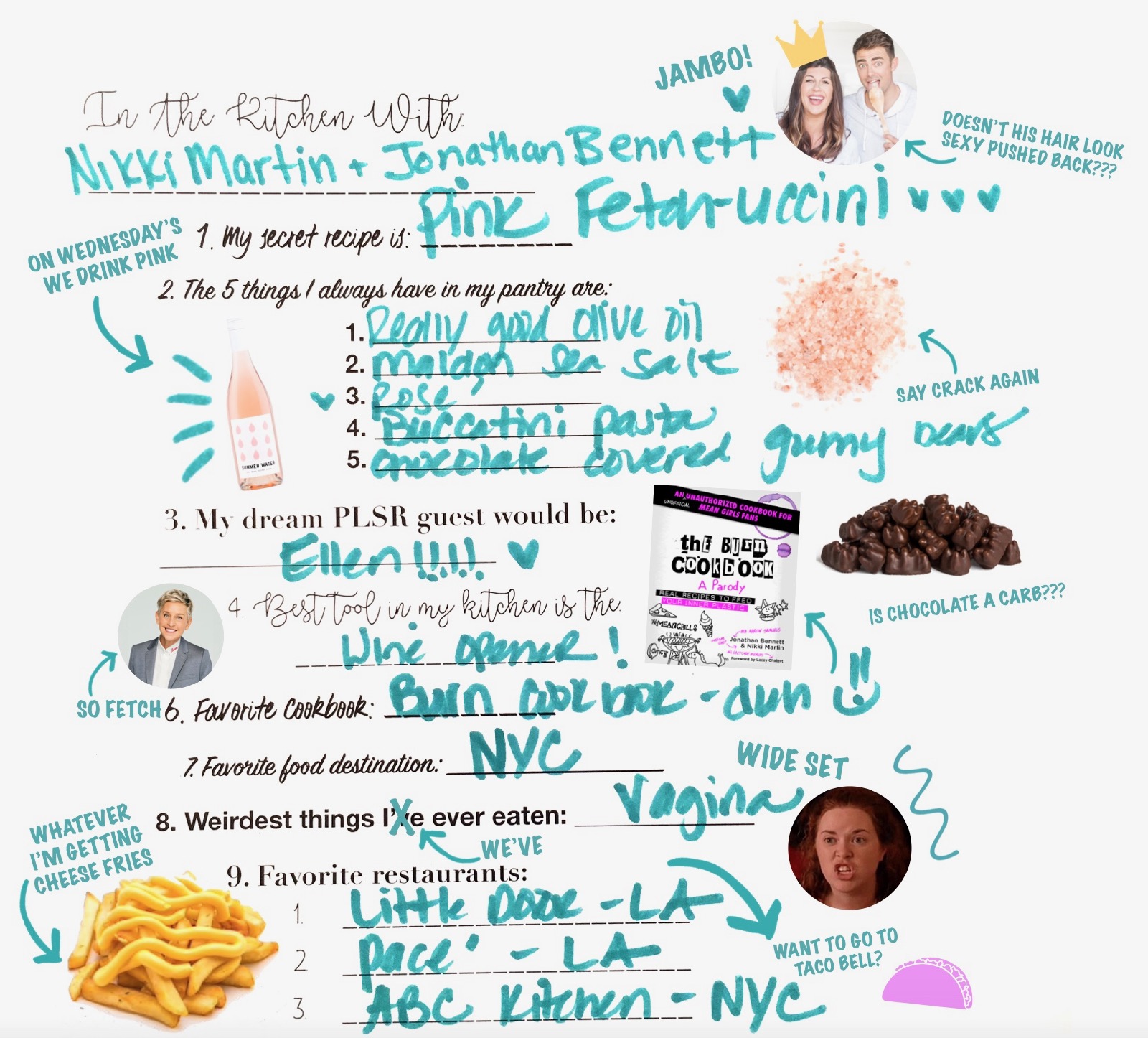