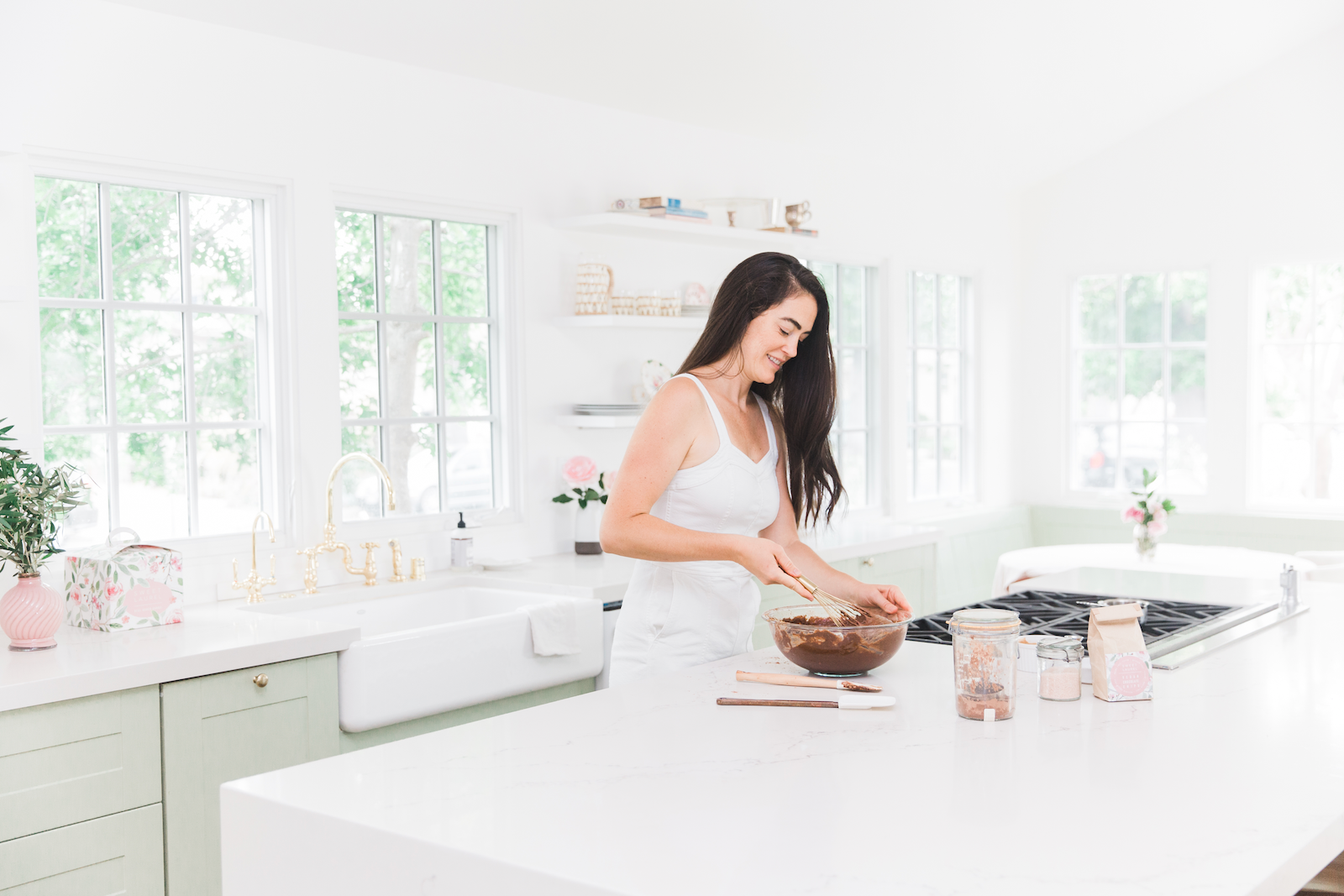 When you lose a few pounds it’s typically due to diet change, an increase in exercise or at least some effort on your part. But when Laurel Gallucci began losing 30 lbs in less than 3 months, along with her period & all energy, she knew something was wrong. She hadn’t changed anything in her day-to-day so she was clueless what was causing the change in her body & overall health. Doctors & western medical experts as well couldn’t, for the life of them, figure out how to cure Laurel. What Laurel did know was she had to make a change & that change she decided was food.

“I had a stomach ache after I ate every single time. The doctor said I had a goiter, where your thyroid is inflamed. I was a college athlete, I had so much energy & then to get told you have a chronic illness – how did this happen to me?” Laurel thinks back on her initial thoughts when discovering something was truly wrong. After lots of doctor visits, Laurel’s bloodwork determined she had Hoshimoto’s disease, an autoimmune deficiency of the thyroid where the thyroid constantly attacks itself. Western doctors wanted to put her on medication for the rest of her life, a bandaid fix as the medical field still hasn’t figured out how to cure autoimmune diseases to this day.

Laurel met with a functional medicine doctor who suggested she change her diet entirely. The same year Laurel changed her diet was the same year she started Sweet Laurel, which she notes “gave her something to heal for.” Sweet Laurel, a whole foods baking company, grew out of Laurel’s background of growing up with tons of siblings whom she would always make birthday cakes for. Not wanting to miss out on that tradition, along with her desire to help those who were suffering from an autoimmune disease like her, were the two driving forces behind her starting Sweet Laurel. “I think everyone has chronic inflammation right now. It’s something we’re all dealing with & it’s on the rise because of everything they put in our food & the medications,” Laurel notes. Claire, Laurel’s friend & the mastermind behind The Kitchy Kitchen, saw what Laurel was doing & knew it had potential to go viral, just as her brother-in-law’s brand, Private Party had recently done. “I had taken a year off teaching because I was very weak & was like I can’t work in a kitchen!,” Laurel notes. Claire encouraged her to start posting on Instagram & to capture the entirety of the brand: cakes, flowers, the kitchen, cake plates, etc. From there Sweet Laurel expanded into baking classes, workshops, an online store, & as of recently, their first store in Palisades Village on the westside of Los Angeles. Don’t worry for all of you who want the full Sweet Laurel experience, they’re planning on expanding all over, starting with the eastside of Los Angeles. 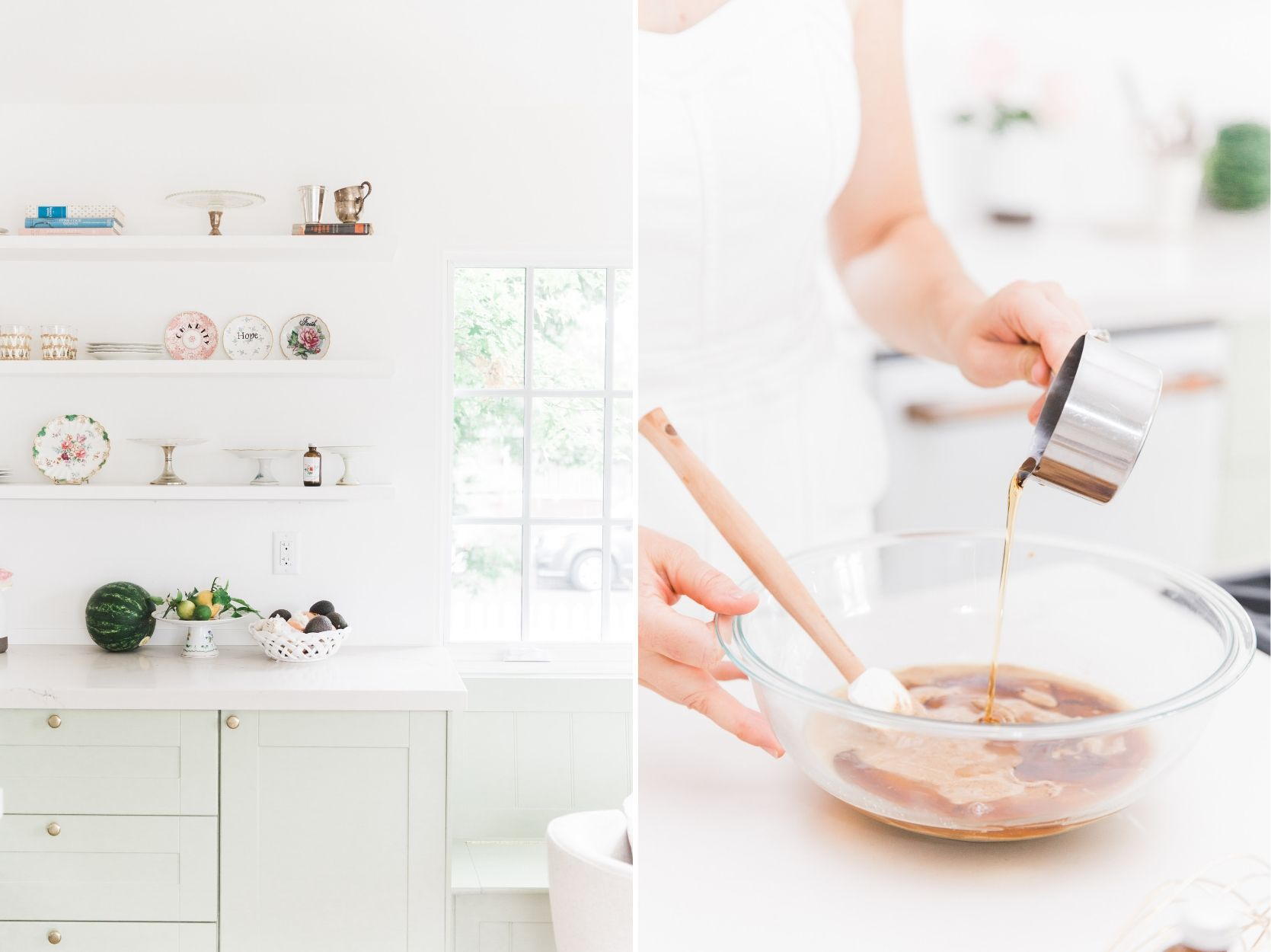 Sweet Laurel really started to see growth when lifestyle concept shops such as Goop & Jenni Kayne published articles & images about them. Support from key influencers such as Lauren Conrad, her mentor Candace Nelson, Martha Stewart, & Mandy Moore surely hasn’t hurt either. While Laurel is still holding out hope to make a cake for Kate Middleton, she’s currently working on the Sweet Laurel second cookbook, Sweet Laurel: Savory, because believe it or not, Sweet Laurel actually prefers savory to sweet! Given her struggle with losing her period due to her autoimmune disease & consequently struggling to get pregnant, Laurel is hoping to write Sweet Laurel: Baby in the future. Within that book, she hopes to share recipes that helped her heal her body & allow her to get pregnant as well as some of her & her son’s favorite recipes such as chicken fingers made in almond flour instead of breadcrumbs. Much like Claire’s advice to share about the brand entirely, the Sweet Laurel books won’t stop there. In Sweet Laurel: At Home, Laurel hopes to write about a non-toxic lifestyle & full circle approach to healing. Laurel’s plans for expansion stretch far beyond multiple books. “If we had product in Costco or Target where millions of people shop I would be on cloud 9. Any company that has an incredible reach because I really want to reach as many people as possible,” Laurel notes her drive behind the company. The key to making all of her big dreams happen, Laurel believes, is having a business partner who understands the aspects of either the business or creative that you don’t.

Just as she made the switch to benefit her health on her own, Laurel jump started her career as well saying “I just started” without any culinary school or formal teaching. “What I did know is that I wanted to keep it simple,” Laurel explains. Wanting to create recipes with only ingredients she could eat, Laurel developed their core 5 ingredients: almond flour, coconut oil, 100% maple syrup, Himalayan pink salt & organic pasture raised eggs. Most of which translate into everyday life for Laurel. When it comes to oils, she uses avocado or coconut oils. Coconut oil when baking is a healthy fat & can be heated up to a pretty high heat. Avocado oil can go even higher. What that means is since oils have a specific heating point, if you surpass that point your body will have a hard time digesting it thus turning into a trans fat, which is not good for you. Given that avocado & coconut oils have a high heat point, you can cook them at higher heats without them becoming unhealthy. As for the 100% maple syrup Laurel uses, it won’t spike your glycemic index too much whereas non-100% syrup or other sugars would spike it wildly. Plus it has tons of healthy minerals within it! Laurel is constantly getting asked why she doesn’t use agave & her answer is, “I have issues with it because unless you’re diabetic, it is actually way too sweet so it spikes your glycemic index quite a bit.” Laurel discovered this the hard way by recipe testing with agave at the beginning of her career & was constantly getting migraines as a result of consuming it. For many of their Keto recipes, Laurel turns to monk fruit: a zero calorie natural sweetener. Laurel also always has nut butters, cacao (for a boost of energy) & tons of cruciferous veggies on hand.

Laurel gets it, it’s not easy to overhaul your diet entirely which is why she suggests starting with just eating organic. Easy enough, right? The reason Laurel swears by this is because those foods have estrogen in them which can severely mess up your body’s composition. We naturally produce estrogen, especially women, so to increase those levels from the food we consume can entirely throw your body off resulting in feeling sick or worse. Laurel also suggests limiting inflammatory foods in your diet & perhaps even trying the elimination diet for about 3 weeks. Doing this helped Laurel discover her Ezikal toast with peanut butter, which sounds like a healthy breakfast, was actually causing her body harm. Laurel discovered through the elimination diet that she was having issues with grains, refined sugar, dairy, & soy. The toast she was eating had wheat & soy in it while the peanut butter is a legume which was causing inflammation in her body. “I will be the first one to tell you not everyone has a problem with gluten,” Laurel notes, “but most people do, especially if it’s American grown wheat.”

Whether it’s the floral topped cake aesthetic or better-for-you ingredients that brings you to Sweet Laurel, there is no denying they’re changing the food industry as a whole. With social media only growing & a large focus of that community dedicated to health & teaching what we’d otherwise have to google to figure out in the past, Laurel & the team behind Sweet Laurel are sharing their knowledge from personal experience to help better your health & kitchen. 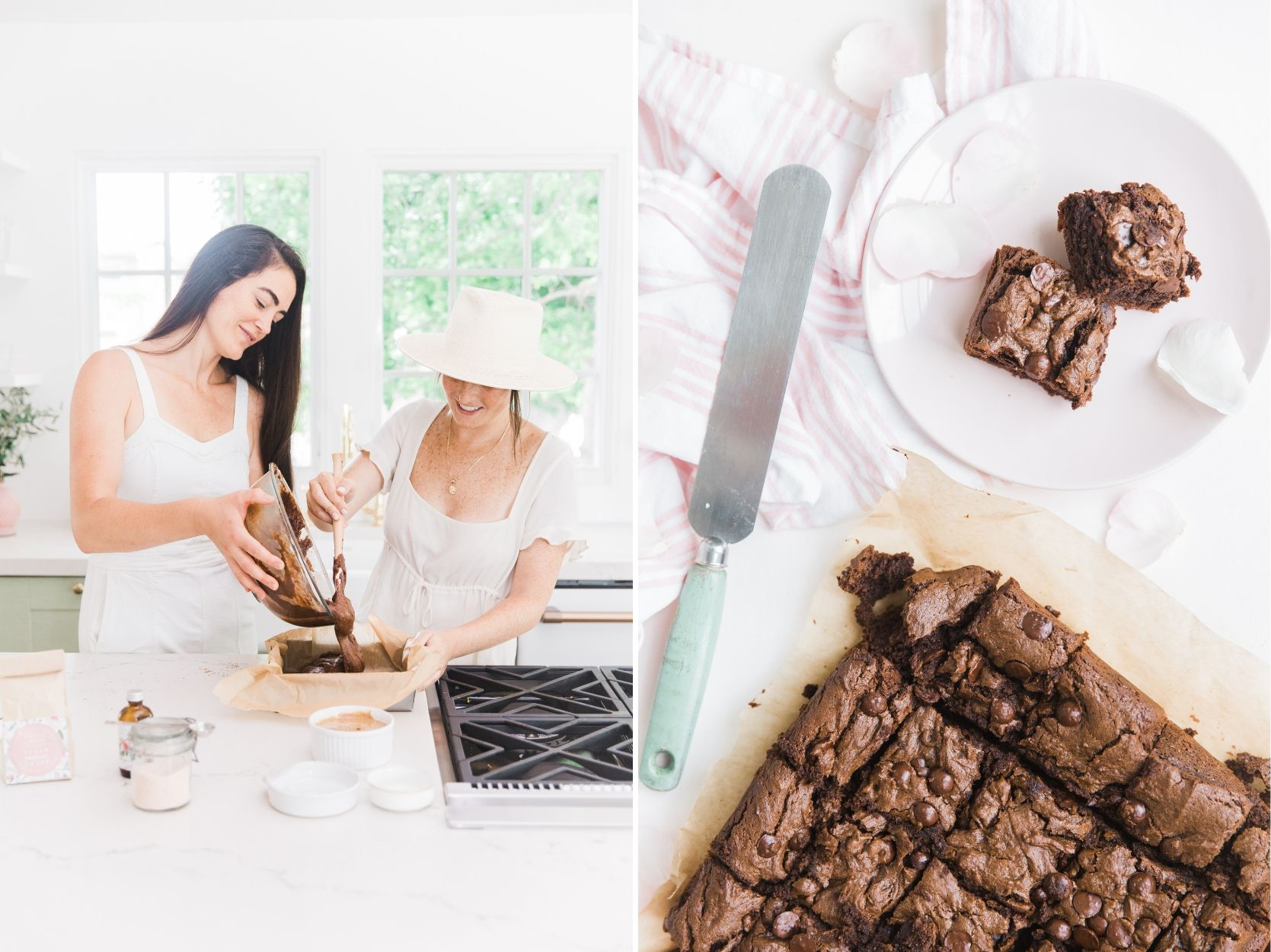 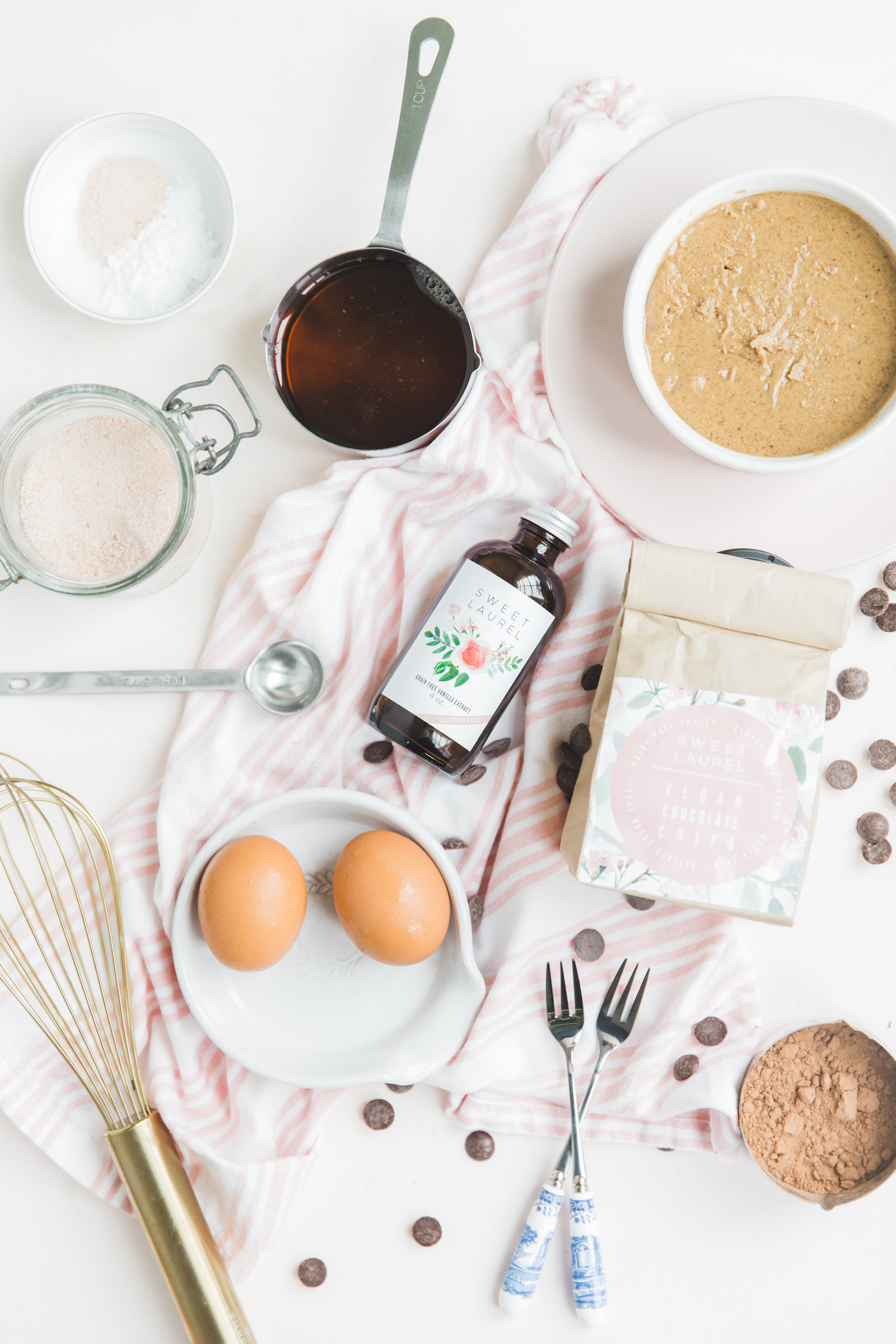 Where do you get all your cake plates, antique items, & home goods?

Thrift stores, Etsy or eBay (Laurel suggests searching “vintage kitchenwares”). The Colleagues on Pico in Los Angeles & Pasadena Architectural Salvage are two of her favorite places to shop in person.

How do you feel about health, diet, & wellness trends that we constantly see on social media?

“For me I’m not going to listen to what everyone has too say but I’m going to do what’s right for my body. Even if I have too much Sweet Laurel, I won’t feel well. It’s about everything in moderation, listening to your body & being in tune because your body cycles through intolerances & people do experience something one day & not another. If you look at everyone else you’ll start to get a little crazy because everyone contradicts one another. Personally, I’m crazy about being grain, refined-sugar & dairy-free but I must admit, I do read a lot especially being in this ‘world’ of health & food, you have to be up to date.”

What are healthy food swaps we can make to better our diets?

“Swap coconut cream or almond milk 1:1 for dairy milk. For sweetener, when we swap in maple syrup for cane sugar we actually use less [maple syrup]. I don’t recommend taking a conventional recipe & swapping in better ingredients because it likely won’t work.”

Is this recipe easy to make?

What foods do you miss that you’ve had to cut out of your diet?

“Everything I missed I was able to create a Sweet Laurel version of: pizza, crackers, brownies, etc., which is why I don’t feel like I’m missing out on anything. That’s a big part of healing, if you feel deprived, you’re not going to get better so you have to figure out things that are going to make you happy. If I go to a work dinner I will eat before & then bring a chocolate bar in my purse that I can eat during. At weddings you should see all the snacks in my purse…” 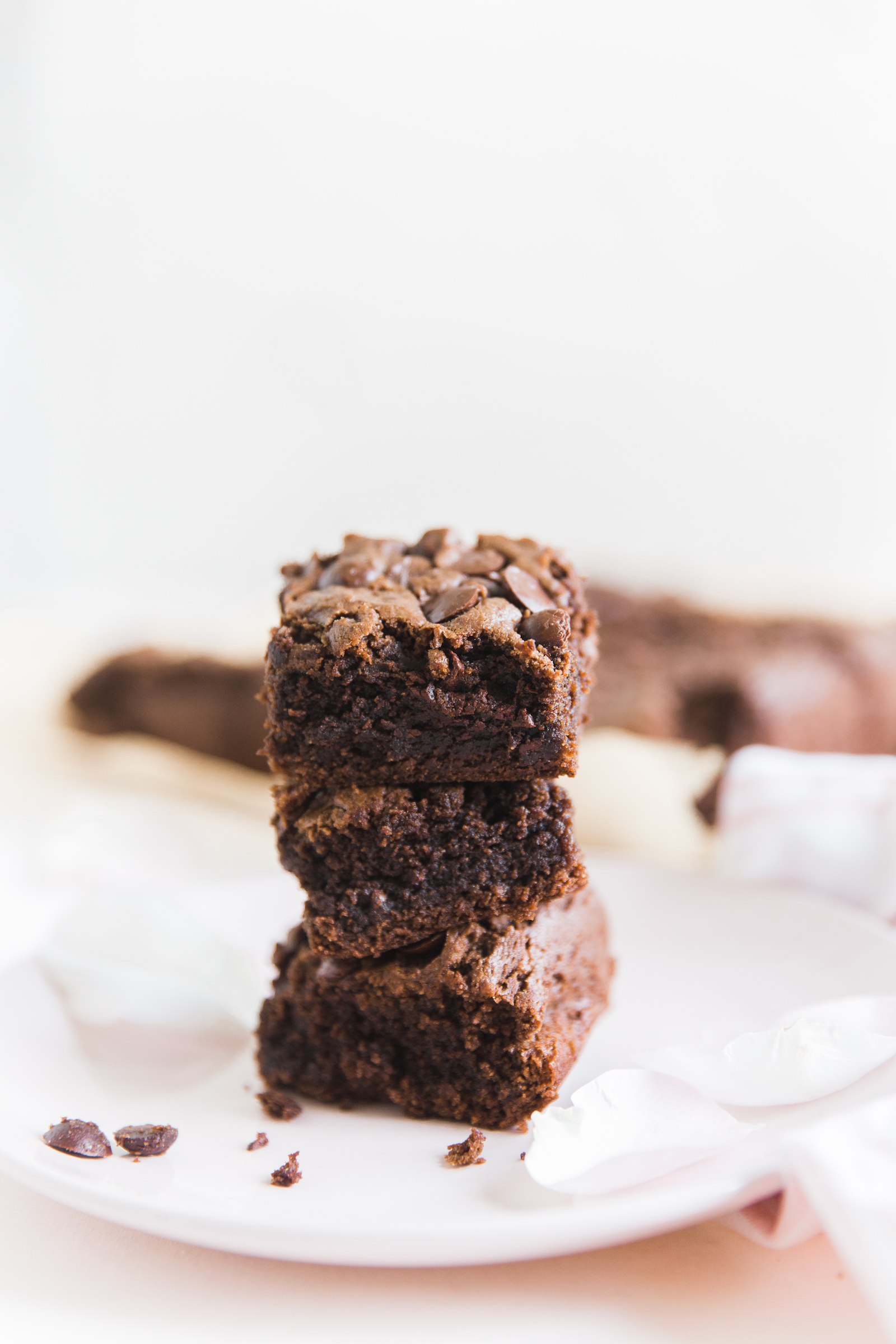 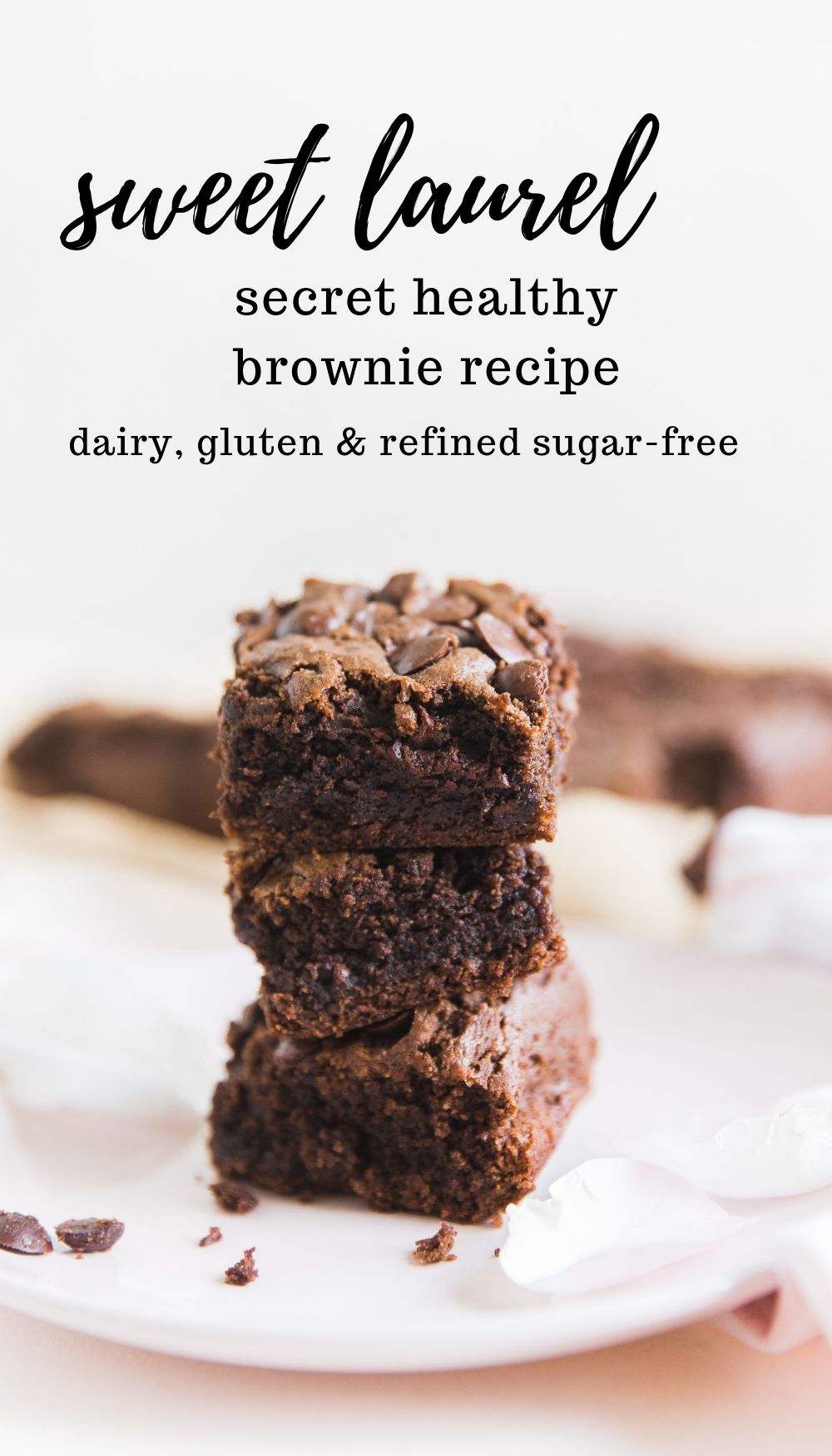