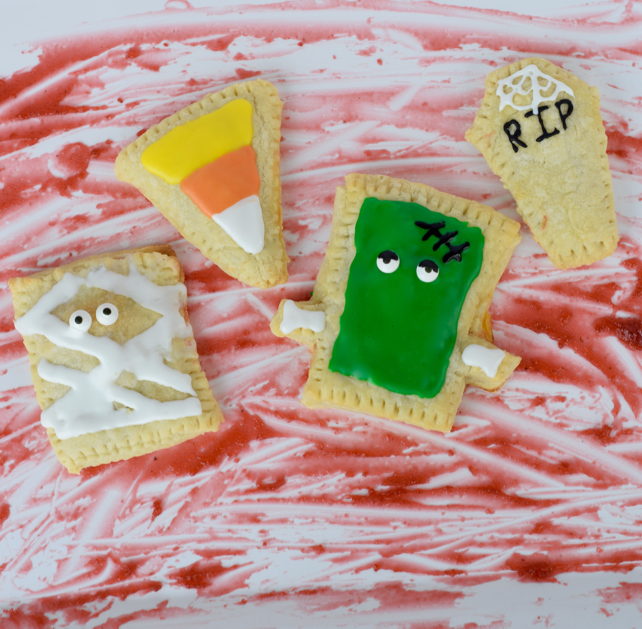 For those of you who love my Mini Pop-Tart Cereal or Breakfast Food Pop-Tarts, this recipe is for ya! For those of you who complained the process was too involved for you, this is for you too! I’ve since developed a new dough recipe that you can use in place of the one below. Simply combine 2 sticks of unsalted butter with 8 oz of cream cheese. Beat with electric mixer until smooth. Add in two cups of all-purpose flour & combine with your hands until dough takes form. Roll into a ball & place in fridge for 2-3 hours. After that time is up, continue using the dough just as you would in the recipe below. Personally I prefer the taste of the pop-tarts using the dough in the recipe below but when I’m in a hurry this one works just as well. Woo hoo for options! 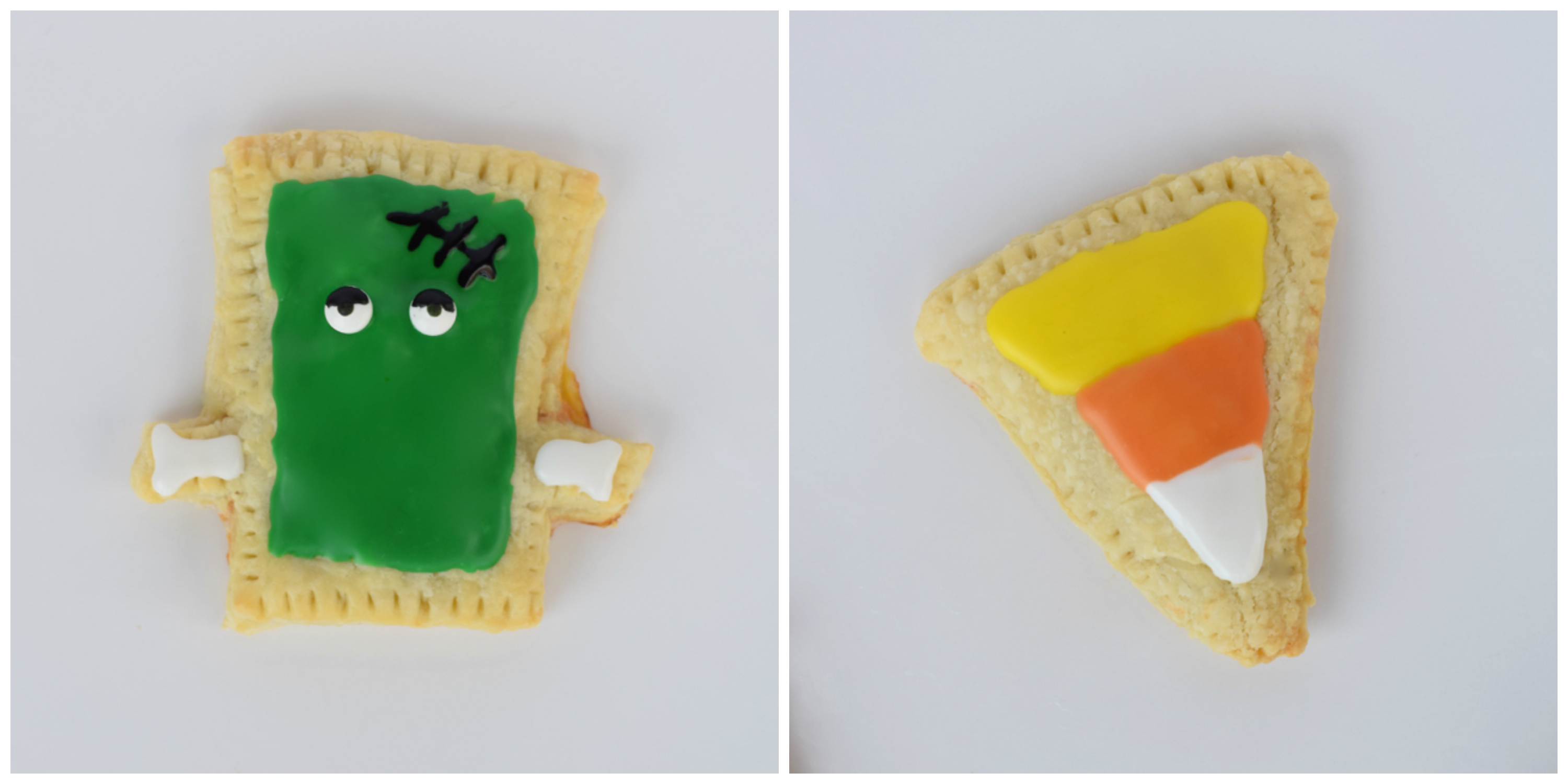 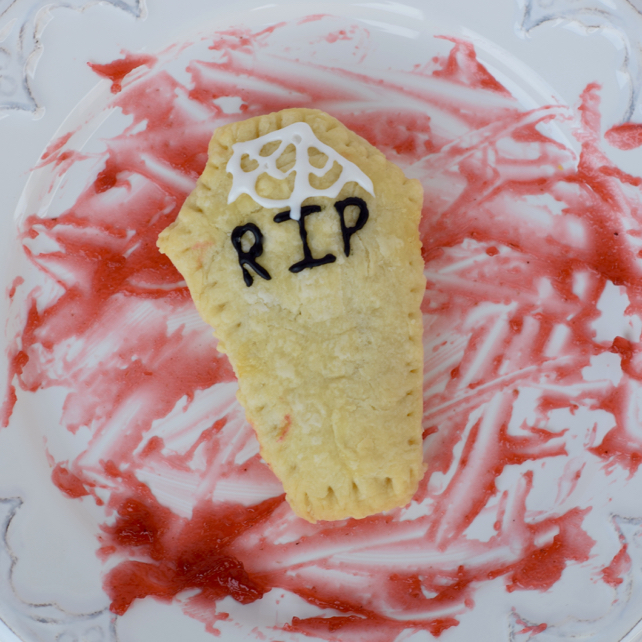 Speaking of options, you can truly fill these pop-tarts with whatever you desire: any fruit filling, chocolate chips, Nutella, etc. For these Halloween ones, I chose raspberry pastry filling for a few reasons. 1. Selfishly, I love the taste! 2. If any leaks out of the sides it looks like blood (eek!) which goes perfectly with the Halloween theme! 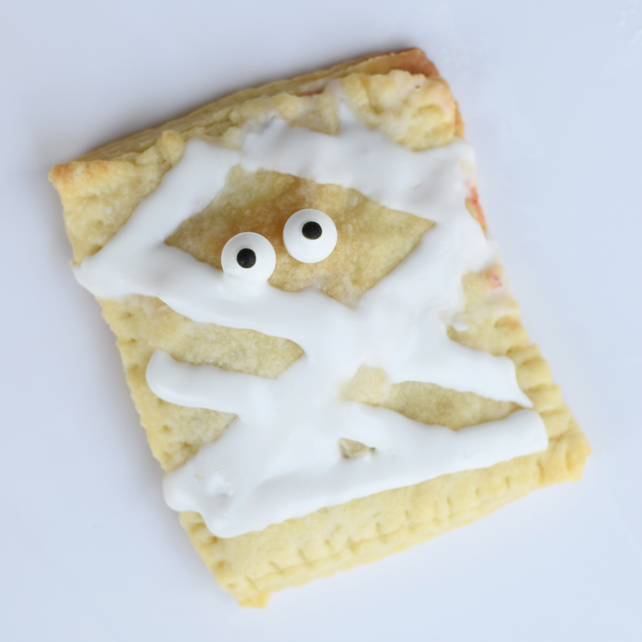 As for decorating it’s a bit difficult to explain that via text. For the coffin I simply wrote, “RIP” on it. Then I drew four lines coming out of one point with two rows of “u” shapes attaching the lines to resemble a spider web. If you want to go the extra mile feel free to draw a spider hanging off the web! That would have looked super cute but I wanted to eat these after & that would have grossed me out way too much! For Frankenstein, I covered the entire large square of his “face” with green frosting. Next, I covered half of the eyeballs with black frosting. I quickly (so that they can stick to the frosting before it hardens) dropped on those Wilton candy eyes & then drew one long line horizontally across his forehead. Perpendicular to those lines I drew three smaller lines to resemble stitches.  On the “screw” coming out of his neck I just added some white frosting. If you can find grey frosting 1. HIT ME UP!! 2. use it as that would look awesome! The mummy was next & was pretty simple. I put a drop of frosting on the back of the eyes & gently placed them on the pop-tart. Then I went a little crazy with the white frosting drawing lines all across the pop-tart. Finally I decorated the candy corn with some yellow then orange & then white frosting just as a candy corn looks. Phewf! If you made it through all that you’re awesome. It’s much simpler to decorate than it sounds! Just lots of detail I wanted to make sure you’re aware of 🙂 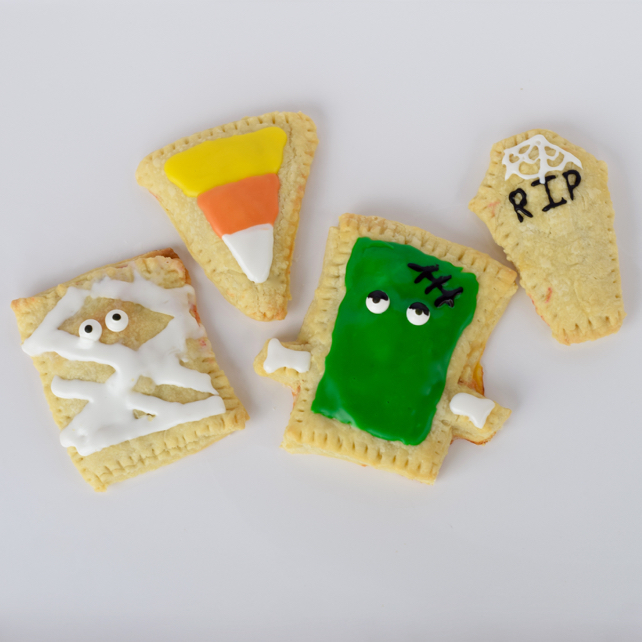 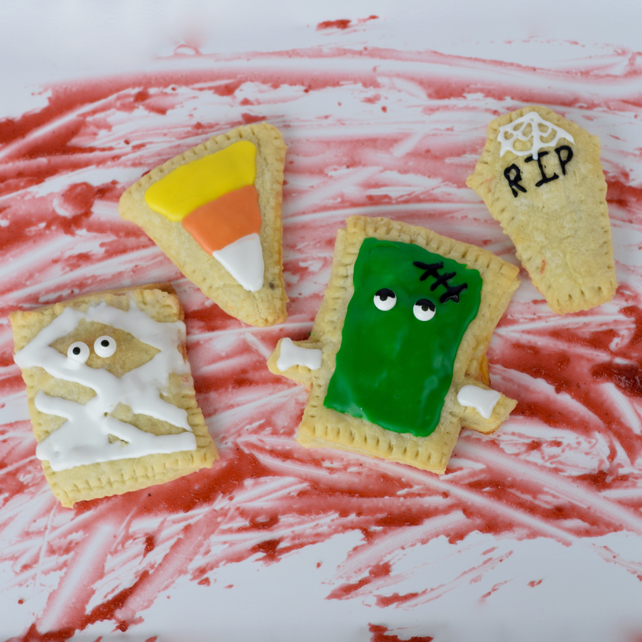