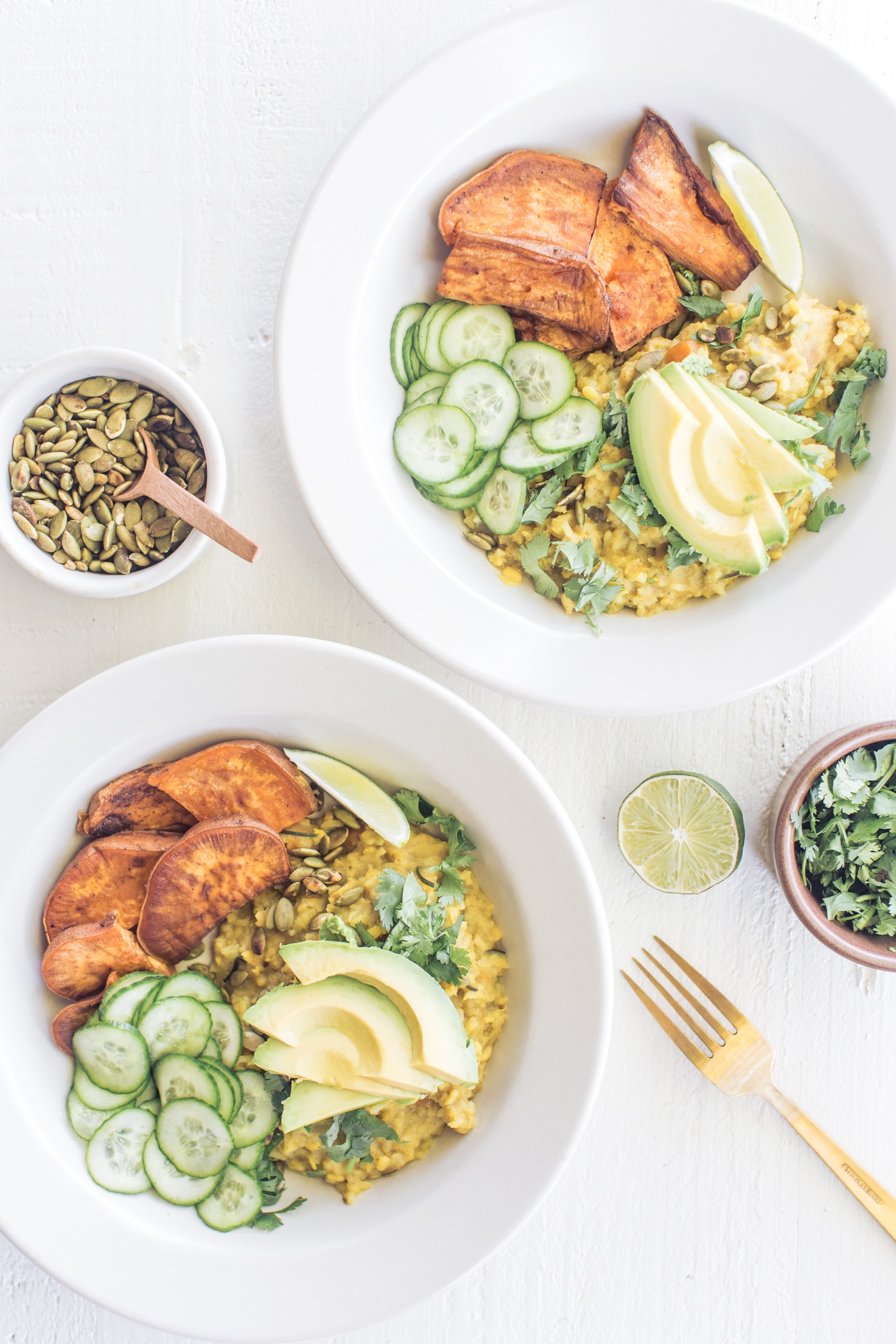 To make women feel beautiful is the mission of LA based fashion designer, Rachel Pally. Whether that’s through one of her own designs or a wellness recipe she whips up in the kitchen, Pally has seen tremendous success. That success, however, didn’t always come easy. “I’ve worked my fucking ass off” notes Pally who, despite launching her own brand immediately out of college, claims this is easily the hardest period of her life. With two young kids, a marriage, & an ever-growing brand, Pally is our modern day Wonder Woman, which is also known as the new norm.

So what does a “normal” day in the life of Rachel Pally look like? Food-wise, she starts her day with grain bread from Whole Foods, which she notes is a sort of European bread that’s sealed & can live on the shelf for a long time. Pally tops it with vanilla Ghee from Fourth & Heart, drizzles on a bit of homemade almond butter, & pours herself a cup of coffee with, again, homemade almond milk. Balancing kids & a career is just routine for Pally at this point. Thankfully, Pally doesn’t have to go too far for work as her entire company is based in her hometown of Los Angeles. To Pally, there was never another option but to run her label out of LA. “This is my city, I’m from here, this is the economy I live in & work in. It’s where my money should go, it’s where my employees should be benefiting.” Pally notes. What is now the socially conscious choice many designers are making now-a-days was the obvious choice for Pally over 10 years ago when she launched her company. What was not so obvious, however, was how fast the company would grow. Pally remembers, “When I first started, Jessica Simpson was the biggest deal on the planet. She wore these [Rachel Pally] pants & I bought a house from that.” It was 2003 & at the time, Pally was 23 years old, didn’t have a website, & was going store to store personally trying to get companies to buy her pieces. While she didn’t have a hard time convincing them to do so, Pally notes that her main piece of advice to someone wanting to start their own business is never to take no for an answer: “When you hear no, which you will, everybody will hear no & most people will hear no in the beginning, it’s can’t affect what you feel about what you’re doing, who you are, what a nice person you are. Part of what made me successful is that no matter how many times I heard ‘no’ in the beginning, I was like ‘yes!’ I’d call a store, no one would pick up so I’d call again & I’d leave a message. No one would call me back so then I’d just show up & be like ‘it’s me again’ & I’m literally going to be in your face until you buy it [my designs]. When people said no I kind of kept coming back with a yes & people were taking a chance on it.” Over a decade later & Pally sells her items on her own e-commerce site, Neiman Marcus, ShopBop, Revolve, & over 60 other stores.

Thankfully, at home, when it’s time to put her mom hat back on in the kitchen, Pally doesn’t hear a lot of “no” from her two young sons. While many parents are fighting their kids to eat just one green thing at dinnertime, Pally laughs at the fact that her oldest son is a better eater than most adults. “He’s five & his favorite food is sushi. Not like a California roll but hamachi belly & octopus. He’s an unbelievably expensive sushi date.” Her younger son enjoys being around food as well & always tries to help in the kitchen, “he gets up in our drawers & I’m like why is this car in with our forks?” Pally laughs. Spending time in the kitchen & having friends over for a large meal is one of the family’s favorite ways to spend an afternoon. “My whole family cooks. My cousin was a pastry chef & I was always her assistant, her taste tester, it was a great job.” Pally adds. While she loves to taste test the beautiful desserts, Pally herself is what she describes as a “sloppy cook” which is why she loves this recipe so much. Pally’s Kitchari recipe, which comes from Ayurvedic cooking, is a one-pot dish where you basically toss a bunch of spices, rice, & beans in with water & let it cook. That & it’s easy to digest, her kids love it, her husband loves it, it’s great as leftovers, is super nourishing, & tastes incredible. Pally is totally our kind of chef, am I right? 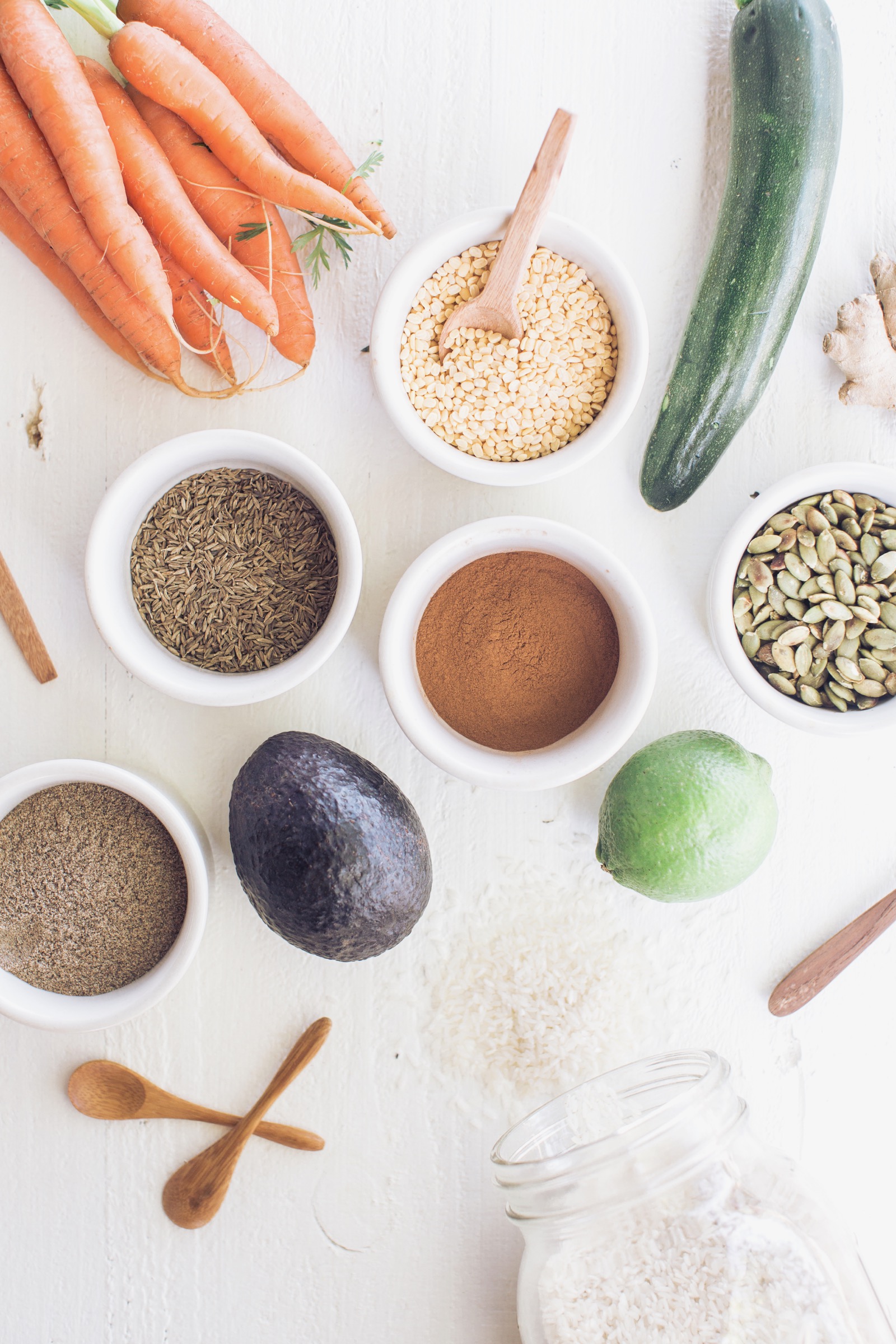 Even with five different flavors of ice cream currently in her freezer & counting Jon & Vinny’s as one of her favorite restaurants, Pally swears her family leads a healthy lifestyle. “We don’t eat processed foods, it’s just not good for you so why would you eat that?” she asks. Adding how it doesn’t even save her that much time, Pally relies on recipes like this one or a sheet pan of roasted veggies as their “fast food”. Pally’s favorite healthy snacks to always have on hand are yogurt from Aris Natural Foods (at various LA farmers markets) which she admits it costs $6 for a tiny carton however she’d willingly pay $60 because it’s that good, quinoa & other grains to have for last minute bowls that Pally makes with the grains as the base & other veggies they have in the fridge on top, & eggs. The only two things she won’t eat? Truffles & mayo. I know, I know my jaw dropped at the truffle comment too… 🤣 Maybe her taste for that will change over time… After all, her personal style & brand certainly have. “It’s scary to move in a new direction but it also feels like now I get to bring my customer base along with my own growth because I’m not who I was at 23.” adds Pally who when she started was only making items in jersey. Pally perfectly sums it up when referencing her jersey designs, which no one else was doing at the time, as the “Levi’s 501 of 8-10 years ago”. As her personal life & style evolve, so does the brand, although she does note it’s hard to shake an association like the one her company has with jersey fabric. Her most iconic jersey dress is still their top-seller to this day. “The first time I wore it (the dress) I was walking across the street, across the West Side Highway to [go] sell it, & a woman screeched across four lanes, honking & yelling out of her window about my dress.” Says Pally, “Now we’re making it in a woven fabric, it’s breathed new life into an older style.” Perhaps that’s the reason for Pally’s designs cult-like following: her followers grow with her. The fact that the designs are stunning, the quality is top-notch, you know exactly who you’re supporting when purchasing the pieces, & so much more along with growing with the brand are just some of the many reasons for Pally’s massive success. 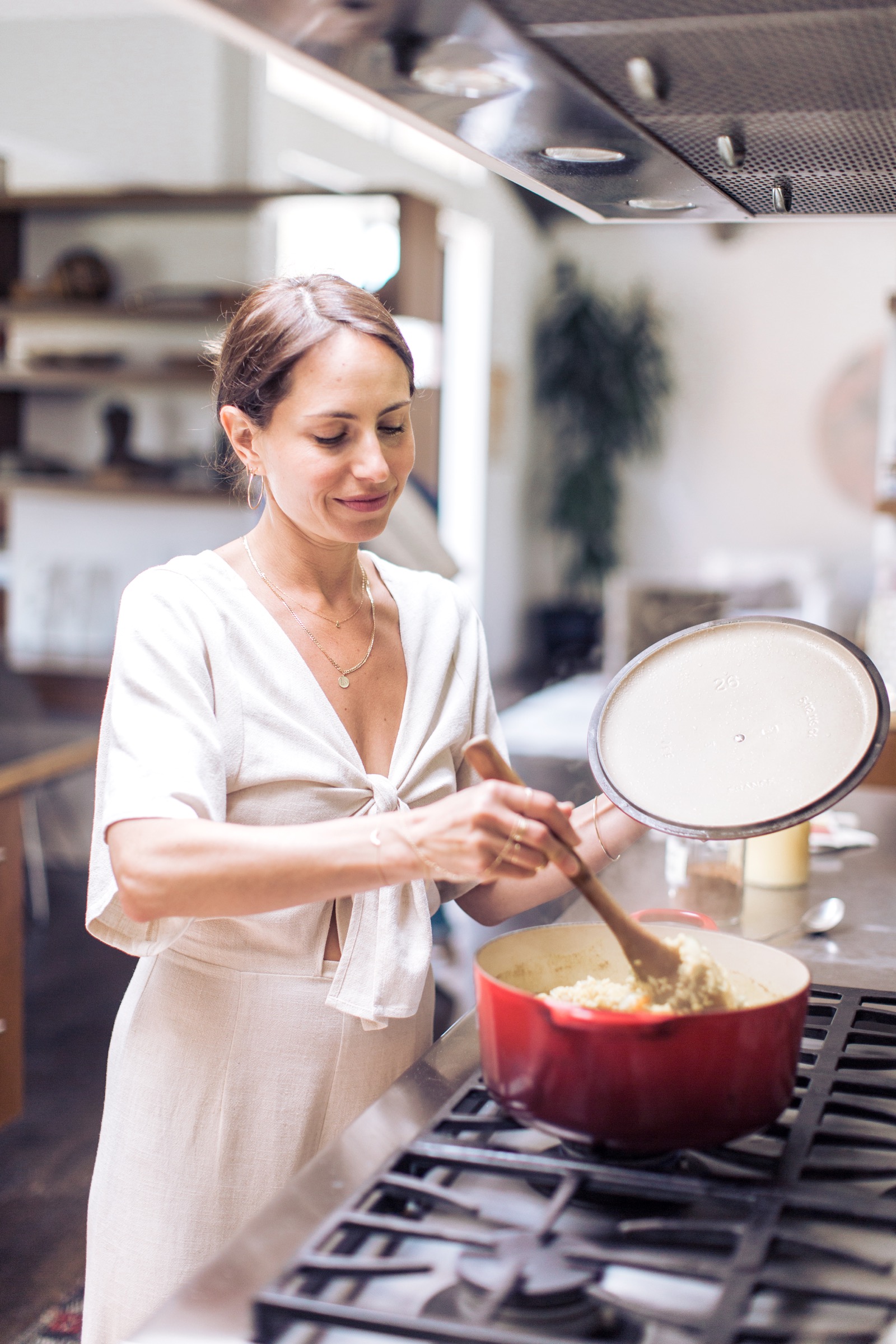 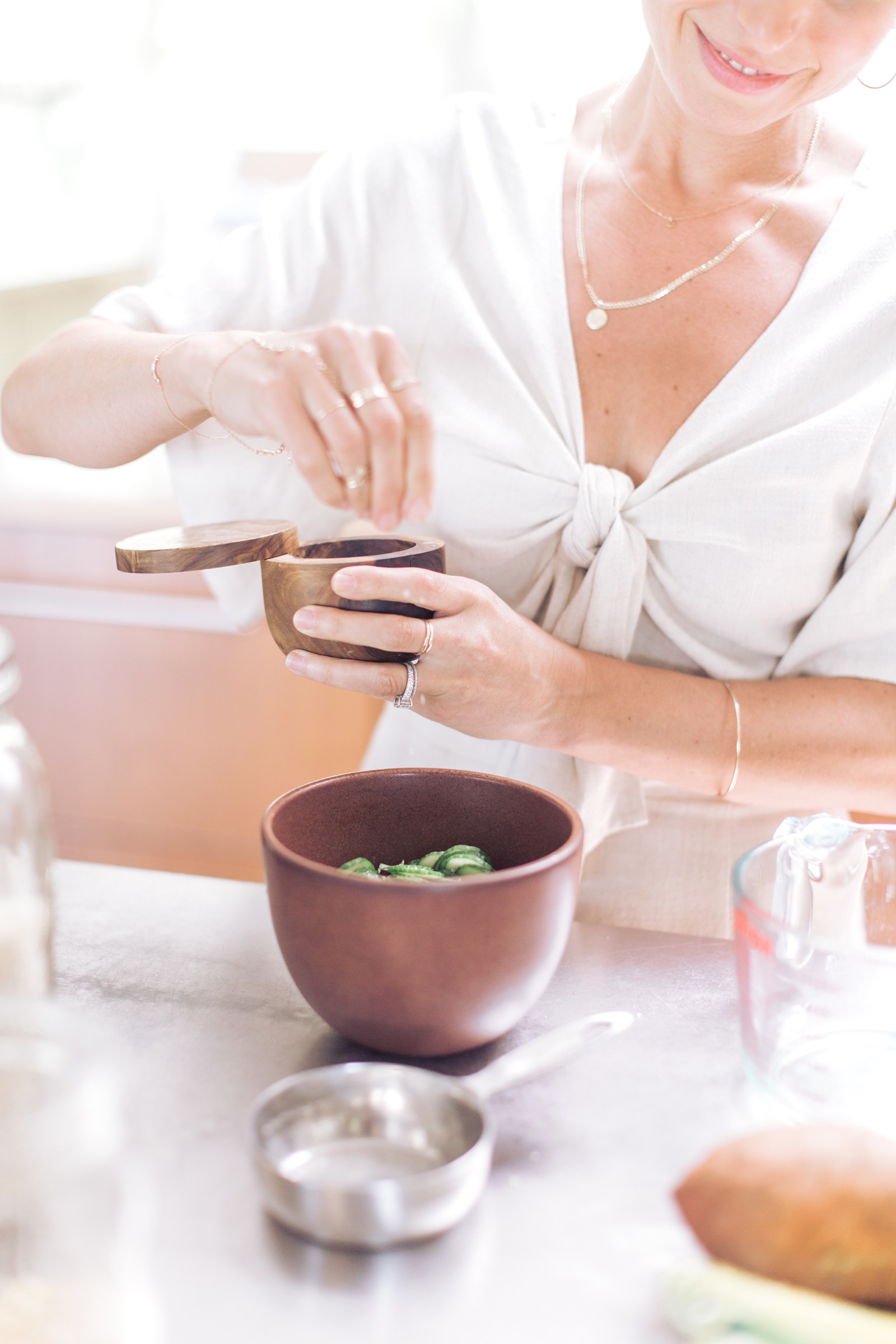 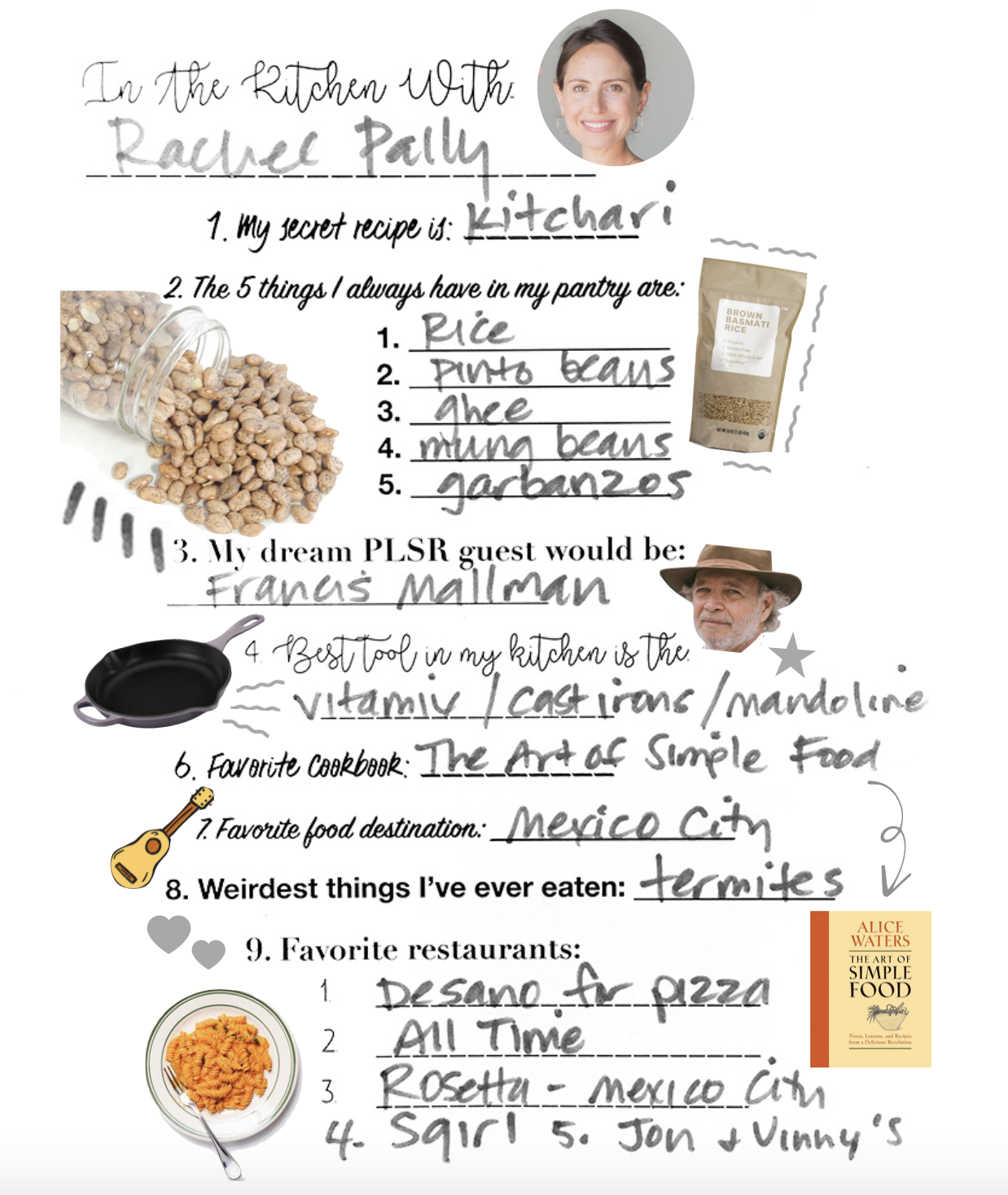 Who Would You Like To Spend A Day In The Kitchen With?

“Francis Mallman! Is he the sexiest man?? I can’t even stand it.” Pally notes, “I want to spend the whole day in the kitchen cooking & eating with Michelle Obama, ugh I love her so much.”

“Ya in theory but when is that going to happen?”

What’s In Your Fridge?

Where Do You Find Inspiration?

“I feel like it’s everything we see. It’s every meal you have. It’s every friend who invites you over for dinner & introduces you to something new. That’s what this meal has been for a lot of our friends because it’s something we eat regularly. If you have your eyes open, there is inspiration everywhere.”